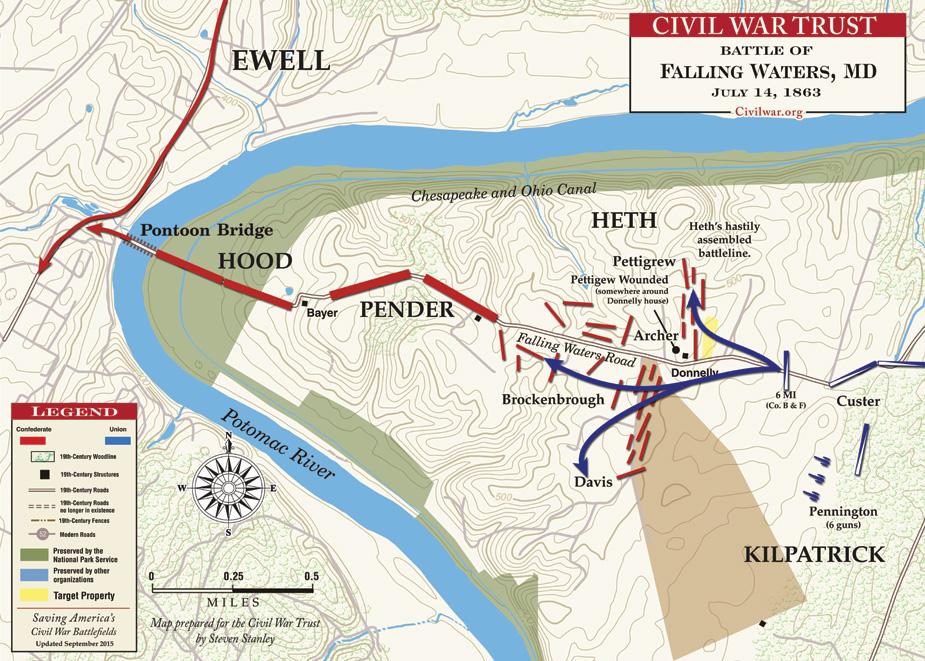 American Battlefield Trust’s map of the Battle of Falling Waters

On the morning of July 14, 1863, The Confederate division of Brig. Gen. Henry Heth, acting as a rearguard for the Army of Northern Virginia retreating from Gettysburg, defended the pontoon bridge crossing opposite Falling Waters, Virginia five miles south of Williamsport, Maryland. Heth’s men were deployed in a north-south line straddling Falling Waters Road. With no screening cavalry or advanced pickets, Heth’s men were cooking breakfast as they waited their turn to cross the river. From the east, Companies B and F of the 6th Michigan Cavalry, the vanguard of Brig. Gen. Judson Kilpatrick’s cavalry division, charged against the surprised Rebels. Gen. James J. Pettigrew, wounded earlier at Gettysburg, was mortally wounded near the Daniel Donnelly house north of the road. Major Peter Weber, commanding the Michigan troopers, was shot in the head and killed instantly in the assault. Kilpatrick’s men captured around 500 prisoners, but Lee’s army had escaped safely back to Virginia.