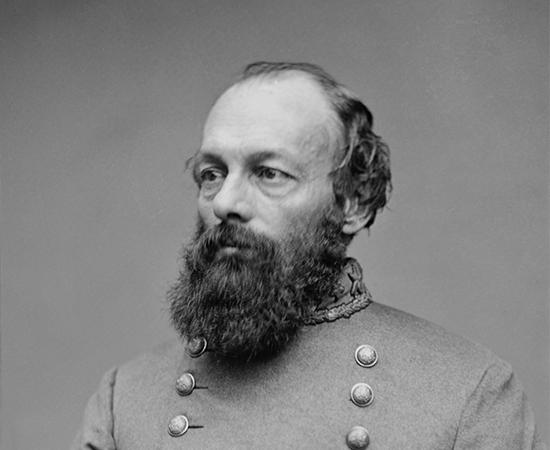 Born in St. Augustine Florida, Edmund Kirby Smith was educated at the United States Military Academy, where he graduated in 1845.  After graduation, Smith served in the Mexican-American War with distinction, participating in the battles at Cerro Gordo and Contreras.  After the war, he served as a Professor of Mathematics at West Point before being sent west to participate in the Indian Campaigns.  Smith was in Texas with the 2nd Cavalry when war broke out in 1861.  At first Smith refused to surrender to Texas militia, but his loyalties changed once Florida seceded Smith resigned from the United States Army, and entered the Confederate army with the rank of lieutenant colonel.

Edmund Kirby Smith was quickly commissioned as a brigadier general within the Confederate army, and served at the First Battle of Manassas, where he was seriously injured.  After recovering, he was sent west to command the Army of East Tennessee.  Fighting alongside Braxton Bragg in his invasion of Kentucky, Smith led his army to victory at Richmond on August 30, 1862.  In early 1863, he was transferred to the Trans-Mississippi Department and tasked with helping halt the Union’s advance on the Mississippi River.  In early 1864, he successfully repulsed the Red River Campaign led by Nathaniel Banks, but as a result of his isolated location, could do little more.  He finally surrendered his troops, one of the last to do so, on May 26, 1865 to General E. R. S. Canby.