Ancestry and Fold3 have been helping people understand their ancestors and why they fought for causes large and small for decades. Now, Ancestry and Fold3 have joined forces with the American Battlefield Trust, so that you can find the veterans in your family's past and understand their stories and the impact on the generations that followed. You can learn more at https: www.fold3.com/projectregiment.

According to the notice given in a quaint Conneaut, Ohio, newspaper, George D. Trowbridge departed this Earth on Saturday, August 25, 1917. He is painted as a longtime resident of the town, an honorable veteran of the Civil War and the husband of a Mrs. Matilda Brabender.

But the truth — first uncovered at the National Archives by Nicholas Redding, a former Trust employee, now president and CEO of Preservation Maryland, and augmented with further research by our partners at Ancestry, Fold3 and Newspapers.com — turns out to be much more complicated.

“My great-great-grandmother was Matilda — George’s second wife, whom he had married in the early 1900s,” said Redding. “But it wasn’t even legal, because he was still married to a woman in Canada. And, as far as we know, Matilda had children from a previous marriage but not with George; meaning I’m not blood-related to him ... which might be a good thing!”

Born in Elmira, New York, on April 5, 1844, George Duane Trowbridge was the eldest son of working-class parents, George and Harriet Trowbridge. The Federal Census of 1850 shows that the family had relocated northeast to Preble, where the patriarch worked as a carpenter and joiner to support his wife and four children, including seven-year-old George.

But during his lifetime, George often had a different take than what the records tell us. For instance, on September 16, 1903, he told a pension official that his adopted name was George Duane Trowbridge. He expanded the story, stating that his adopted family claimed his biological father’s name was Keefe and that his own baptismal name was William Keefe. Of course, this contradicts another affidavit claiming that he had never known anyone by the name of William Keefe. The story becomes even more convoluted and dicey as the Civil War arrives.

At approximately age 17, the youngster enlists as “Duane Trowbridge” with the 12th New York Infantry, Company D, on May 13, 1861, in Elmira. On May 29, the unit moved to Washington, D.C., where, upon arrival, it partook in the defenses of the nation’s capital until July 16. After, the 12th New York moved on Manassas, where the unit fought in the first full-scale battle of the war on July 21. Later, the unit saw action at Upton’s Hill, and returned back to Washington, D.C., where George deserted on September 21.

By November 1, 1861, George had found a new home with the 76th New York Infantry, Company E. The unit remained in New York until January 17, 1862, when it then left for Washington, D.C. Yet again, George found himself amid the defenses of Washington. But on April 7, 1862, he deserted once more.

Here is where the records become really hard to follow. Pension claims, among other sources, deem that George took on the alias of William Keefe, a soldier in the 17th Connecticut Infantry, Company D. Index records confirm that such a man existed. It is also known that the regiment was organized out of Bridgeport, Connecticut, in late August 1862, in keeping with the timeline of George’s supposed wartime service.

Despite the inability to 100 percent certify Keefe as our good ol’ George, it is obvious that Redding’s ancestor was bounty jumping. With no intention of staying for long but with every intention of reaping the financial benefit, bounty jumpers would enlist, collect their bounty, desert and then reenlist elsewhere.

Next, Ancestry pinpointed George in the 1870 Federal Census: a 27-year-old boatman living in Auburn, New York. But don’t think that he had “gone straight”: A June 6, 1879, Fall River Daily Herald proclaimed George was “OUT OF AUBURN PRISON AND ATTEMPTING THE ROLE OF A PRODIGAL SON.” Knowing that a son of Biba Baker, a “respectable and well-to-do” mechanic, had run away and long been considered dead, George attempted identity theft. He was armed with a fanciful tale of adventure, claiming he had been to all parts of the world, accumulated a large fortune and was home to seek reconciliation and share his wealth. Surprisingly, the ruse worked on most of the family, and celebration ensued. However, suspicions within the Baker family grew, and George was called out as the “notorious horse thief” who had just been let out of Auburn Prison. Thrown out of the Baker home, George returned to form, stealing identities and horses. After his arrest in Schenectady, The St. Albans Advertiser connected him to the Loomis Gang, a largely family group of outlaws who had plagued central New York from the 1840s to the 1870s.

Prison records show that George was (re)admitted to Auburn Prison on September 1, 1879. While files are lacking, Ancestry’s community of users assert that — after serving his prison time — he went to Canada and married Margaret Lyons on January 29, 1887. He didn’t stay long.

On July 21, 1890, George filed for a pension while living in Ohio. It claimed that he served with the 12th New York Infantry, 76th New York Infantry and 17th Connecticut Infantry — and additionally noted that he had used the alias of “William Keefe” and was married to Matilda K. Trowbridge. All the while, George was still married to Margaret in Canada, having never sought a divorce.

In the years that followed, George kept busy. Most notably, he served time in Ohio State Prison, tracked down comrades to back his pension claims, stole more horses, swindled a widow out of $200, served more time — twice — in New York and tried (unsuccessfully) to send a stolen horse to Ohio.

By September of 1901, fate caught up with George and he was taken in for pension fraud and for impersonating a special examiner of the Pension Bureau. He was held in Utica, New York, under a hefty $4,000 bond. For his trial, George turned on the dramatics. Newspapers described him as “almost at the point of death” when he laid upon a cot in the courtroom, allegedly paralyzed on his right side and blind in both eyes. Of course, when he’d been arrested only a few months earlier, he’d had no signs of poor health. The charges stuck, and George went back to prison.

In March of 1903, George was released for his crimes and promised the judge that he’d never return to New York. And as far as the records show, he never did.

That September, KT Meade, special examiner from the Department of Pensions, was sent to find George and secure a complete history of his military operations. Funny enough, he didn’t find a blind or paralyzed man, but instead a man known for frequenting “the lowest dives of the City of Conneaut.” Meade interviewed George once in September and again in October, receiving inconsistent information from him that contrasted with records on file. Meade even emphasized in his report that he had “the feeling that all the information which the soldier gave was wholly unreliable...”

Marriage records show that, on October 5, 1904, George finally married Matilda, a woman he’d been associated with for quite some time — and Redding’s great-great-grandmother. The 1910 Federal Census lists George and Matilda with three children —determined not to be George’s — living on Buffalo Street in Conneaut, Ohio. When he passed in 1917, he was buried in Center Cemetery.

“The Civil War has always been real to me, but this takes the story of the Civil War and makes it real for my family,” said Redding. “It paints a realistic story of what happened — not everyone was a battlefield hero; there were people who took advantage of the situation, and that just so happened to be the case with my ancestor.”

Although not covered in military glory, George Trowbridge could still be the protagonist of a Hollywood flick — albeit of a very different, though no less interesting sort! 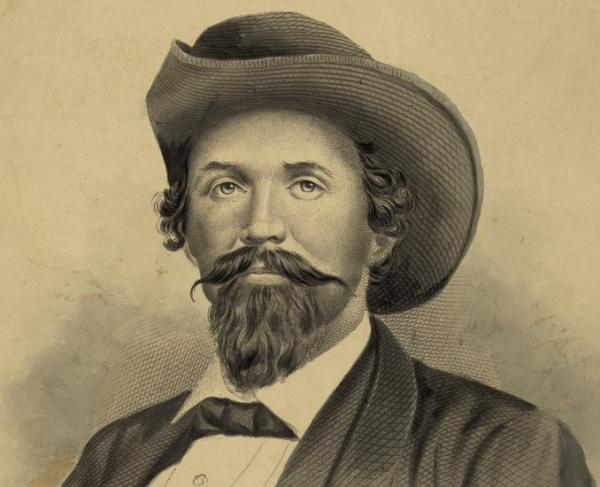 Robert Benthall Sailed Aboard CSS Virginia
In the Bloody Cornfield, Pvt. Howard Left Behind a Widow and Three Children
Ancestor Research Guide
About Our Ancestry® and Fold3® Partnership
Color Bearers Membership and Benefits