Sowing the Seeds from the Angel of Death's Last Harvest

The Afterlife of the Battles of Franklin and Nashville

On the evening of November 20, 1867, a softly churning train crawled into the outskirts of Murfreesboro, Tenn., its long file of cars clanking as the engine slowed. On board, a veteran of the late unpleasantness, L.D. Barnes, prepared to disembark. He had in his possession something rather unusual, an obligation that weighed heavily on his mind. The trip alone was enough to give him pause, for it was virtually impossible to traverse this part of the country without crossing hallowed ground. No other state save Virginia suffered more military engagements than Tennessee. But it was this journey especially — for Barnes and for everyone else on the passenger manifest — that brought forth an unsettling possibility. As much as citizens wanted to believe otherwise, this particular train brought disturbing evidence that the war of two years past was not yet over.

Such was the lingering trauma of the great national test: a war during which, on average, almost 1,000 soldiers died every 48 hours, for four long years. In this regard, the Battles of Franklin and Nashville offer compelling case studies as to why Appomattox did not immediately create a lasting peace. Something happened after these contests that might have helped the nation heal itself, but, instead, deepened the emotional and physical damage. For a time, it seemed as if the pain of the war would not only remain, some believed it should be inherited.

The horrors that beset the last stages of the war produced ghastly harvests, which soon resulted in macabre questions of storage. Of the 2,000 dead at Franklin, the vast majority were folded into the mile-long arch of trench lines along the south side of town. Much of the burial work fell to the Confederates, who had the unusual experience of losing the battle but commanding the field thereafter. By necessity, the task was done in a rush. Twenty-two-year-old Milton Ryan of the 14th Mississippi recalled, “We dug trenches two and one half feet deep and wide enough for two to lay side by side. A piece of oil cloth was spread over their faces.…” Chaplain Thomas R. Markham, who served with Confederate units along the eastern flank, remembered similar shallow internments for his men, “Seventy in two long parallel trenches…laid side by side, their blankets their shrouds.” Scores of other burial trenches left deep scars across Carter’s Hill near the cotton gin and along Columbia and Lewisburg Pikes.

Yet this was but one layer. Also buried in and around Franklin were scores of Union and Confederate dead from previous skirmishes and encampments in 1862 and 1863. Also interred on Carter’s Hill were several black Union soldiers, casualties from Hood’s retreat in December 1864. Similar deposits pockmarked much of Nashville, a city held by thousands of Federals since late February 1862 and contested by Confederates many times thereafter.

Resting in the ground, masses of blue and gray laid side by side after a long and bitter struggle. Battlefields became graveyards as the remains of soldiers, intermingled and collective, became a mutual loss for the nation as a whole. But this fusion of the dead would soon be fissured by the living; this precarious reunion in temporary burial sites lasted slightly over a year.

The first soldiers to be relocated in numbers were Hood’s men who fell at Franklin. Interred barely beneath the surface, their limbs and torsos were slowly unearthed by the spring rains. For this farming community of roughly 1,000 residents, the reemerging remains outnumbered the townspeople nearly two to one.

In the spring of 1866, John and Carrie McGavock (whose home, Carnton, served as a Confederate field hospital during and long after the battle) donated two acres of their land for internment of the Confederate dead. In doing so, the McGavocks not only cared for the bodies of lost fathers and sons of the Confederacy, they also began to interpret the battle and, consequently, the war. Until his death, John McGavock gave tours of the battlefield’s prominent positions, retold tales of the valor of the Confederates, and with his wife Carrie, preserved the identity of the dead in the cemetery.

When the federal government sent assistant quartermasters southward to appropriate land for national cemeteries, the idea of a site in Franklin drew significant protests. The officer in charge reported, “[T]he citizens of Franklin will do everything in their power to defeat the locating of a cemetery there, and will not sell land to the government at any price. In case a location is taken forcibly, a guard of twenty men will be necessary to prevent desecration.”

As unwelcoming as former Confederate communities could be, federal lawmakers worked to return the favor.  Having begun creating national cemeteries during the war (due to unforeseen massive losses), Congress imposed a “Union only” policy for its official resting places. In the Nashville area, most soldiers were initially brought together at the city cemetery, but public and private entities aimed to make this a temporary arrangement. Ladies Memorial Associations in Franklin and Nashville worked diligently to create Confederate-only cemeteries, depicting the fallen as eternal separatists. The Nashville chapter created Confederate Circle in Mount Olivet Cemetery and paid to move 1,500 fallen soldiers to the location.

On the federal side, U.S. Assistant Quartermaster Edmund Whitman advocated removing all Union dead from Confederate locales, declaring, “[E]very consideration of interest and patriotism would suggest the removal of the dead from the present detached cemeteries … and their concentration and reinterment at some distance from the city…where the scattered dead whose blood watered the fields of Tennessee would meet together and receive appropriate honors.” Yet Whitman added that the Union dead should remain in the South, where “on Southern soil they would help to educate the children whose fathers fought to dismember their country, to love and cherish it and to seek its honors and rewards.”

Maj. Gen George Thomas, Union victor at the Battle of Nashville, proposed reburial at a sprawling location just north of the city. Tradition states that he mandated the new, sweeping graveyard straddle the rail line coming in from Louisville, so every Northerner riding into Nashville would be reminded of the war’s heavy price. After two years of moving bodies to their new destination, the end result was indeed an imposing sight. With more than 16,480 internments, the Nashville National Cemetery held more Civil War dead than Arlington.

Three of the 10 national cemeteries holding the most Union dead are in Tennessee: Nashville, Memphis and Chattanooga, with Stone’s River National Cemetery in Murfreesboro not far behind. Initially created to hold the dead from that iconic battle in the winter of 1862–63, it eventually began to absorb other bodies exhumed from across Middle Tennessee and northern Alabama. Yet even this separation proved to be a struggle.

Charged with conducting the first reburials, Chaplain William Earnshaw and the 111th U.S. Colored Troops interred thousands in this new cemetery. In his reports, Earnshaw recalled, “[I]in some places we have been very unkindly met by citizens, they are trying by every possible means to annoy us….”

As for the Federal dead at Franklin, many were still in shallow graves during the summer of 1866. They were scheduled to join their fallen comrades buried in Columbia 18 miles to the south. At first, this operation appeared as if it would reverse the national trend of a renewed North-South separation and bring Union and Confederate, black and white, together in peace at a place called Rose Hill.

In December 1865, Whitman reported:  “The bodies of all soldiers who have been killed or who have died at Columbia are deposited in the South East corner of the Rose Hill Cemetery.…There is no objection to the bodies remaining where they are, and a favorable arrangement could doubtless be made with the Trustees to transfer to the same locality any other bodies buried in the line of the Nashville and Decatur Railroad.” Yet Whitman still expressed a grave concern: “The chief objection to the location is the proximity of the Rebel graves before mentioned.”

The feeling appeared to be mutual. Confederate Maj. Gen. Patrick Cleburne, killed in action along the earthworks at Franklin, was initially buried at Rose Hill. When it became known that he lay next to white Union officers and African Americans, his body was quickly dug up and moved to the chapel graveyard at St. John’s near Mount Pleasant.

Still, on July 4, 1867, there was hope. The now-completed Union cemetery at Columbia held Federal dead from Franklin, plus another thousand who died in Middle Tennessee during the course of the war. Describing the finished site, the Nashville Union and Dispatch offered a glimpse of budding reconciliation: “They sleep in a piece of ground immediately adjoining the resting place of the soldiers of the Confederacy. The same enclosure protects both.”

And yet, it was not to last.

Four months later, L.D. Barnes and his fellow travelers arrived at Murfreesboro. There was a reason Barnes came to this place, for he was responsible for most of those piled on board. Attached to this train were 14 cars, loaded with one class of passenger: the deceased. In all, there were 1,300 bodies on the manifest, each one a Union veteran removed from Columbia, refugees of a failed attempt to have Federals and Confederates rest collectively in symbolic reunion. Planted and pulled out again and again, these men finally reached their last stop at Stone’s River National Cemetery. Barnes’s macabre mission served notice that the nation was not yet at peace. Although the warring parties had relieved their legions of the living, they continued to maneuver their armies of the dead. On average, military fatalities from Franklin, Nashville and nearly every other contest in the Civil War were moved at least twice before coming to a final rest.

And yet, while sectionalism on the national level continued, individuals overwhelmingly longed for closure. Within months of their creation, collective burial sites became destinations for family and friends who wished to say goodbye to soldier sons. Unfortunately, this opportunity was not available to all, as nearly 40 percent of the Union dead, and well-over 50 percent of Confederate dead, were buried in unmarked graves. But for the rest, visitations and awareness of final resting places enabled a degree of invaluable recovery.

Decades later, as veterans gradually found the will to talk about their experiences, they frequently congregated at cemeteries of their fallen comrades. These graveside reunions laid the foundation for the establishment of state and national battlefield parks, creating quiet vistas where these veterans were able to return, reflect and reconcile. It remains one of the great paradoxes of the American Civil War — killing fields transformed into places of peace. Such is the enormous leverage of preservation, where memory survives, even when people are lost. 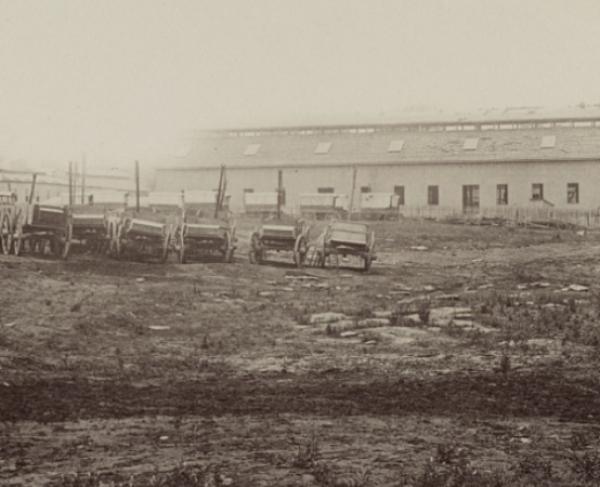 An Interview With Thomas R. Flagel