The Georgia countryside changes south of the Oostanaula. Gone are the mountains and ridges of the Dalton area which gave the Army of Tennessee the defensive position that Johnston always searched for. Rolling hills of the Piedmont afforded no immediate defensive position as Johnston's army began marching south during the night of May 15-16. Thus, Johnston ordered his troops to keep marching through Calhoun, the railway town five miles south of Resaca, as well as Adairsville, ten miles farther south by railroad. The retreat continued toward Cassville.

On May 16 Sherman begin pursuit as his armies crossed the river and marched toward Adairsville. Wheeler's cavalry offered stiff resistance, but on the 18th Federals occupied Adairsville. From there two roads led south: one directly to Cassville, nine miles to the southeast, and another to Kingston, a town about six miles west of Cassville. Around 6 p.m. on the 17th Johnston met with his corps commanders and laid out a plan which he hoped would provide opportunity to attack the marching Yankees. Sherman would probably use both roads from Adairsville. Hardee, Wheeler's cavalry, and the army's trains would move to Kingston, leaving a "plain, well-marked trail," luring the enemy's main force in that direction. Hood's and Polk's coprs would march to Cassville and take position. Then, when enemy infantry—presumed to be a smaller column, unsupported by the other—approached, Hood would move out by the right and attack the Federals in flank.

Johnston's plan fell into place when McPherson's and most of Thomas' armies marched toward Kingston on May 18. Hooker's Twentieth Corps moved on Cassville, and Schofield's Twenty-third to its rear. North of Cassville Johnston positioned Polk's Corps to face Hooker, with Hood's to the right. On the evening of the 18th Johnston issued a confident general order to the troops declaring that in the morning they would attack the enemy. Polk would advance in a demonstration against Hooker's front while Hood struck the enemy in flank.

At 8 a.m. on May 19 Hood's infantry started marching to the area east of the Cassville-Adairsville road to be in position for their attack. At about 10:30, however, one of Hood's staff officers saw Yankee cavalry on the right flank, coming in from a road to the northeast. Sherman had ordered a raid upon the Western & Atlantic. By chance, this column came upon Hood, who halted and drew back, notifying headquarters. Johnston first responded with disbelief but then accepted the situation. He canceled the attack, and as Hardee's corps joined the army from Kingston, ordered it to retire to a ridge line southeast of Cassville.

The next day Johnston blamed Hood for succumbing to a "false report" of enemy bearing on his flank. In his memoirs, written a decade after the war, Johnston was even more critical, claiming that "the report upon which General Hood acted was manifestly untrue." Historian Richard McMurray states that to the day he died, Johnston believed Hood had acted on false information. Hood died before publication of the Official Records volumes treating the Atlanta Campaign. If he had been able to read Union Col. Edward McCook's report of May 20 concerning Cassville (OR, vol. 38, pt. 2, printed in 1891), Hood would have won the argument. 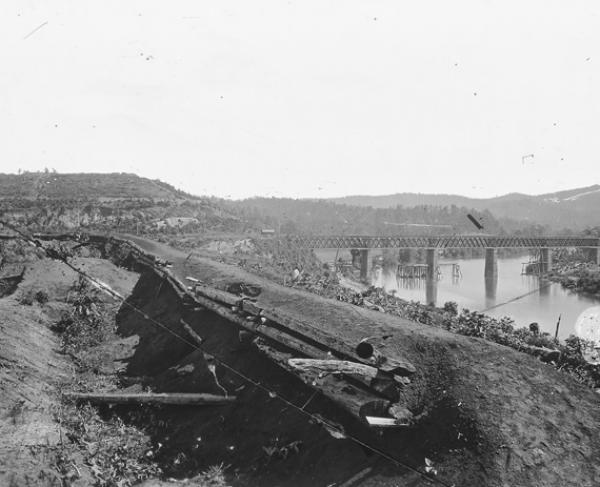