Forging a Preservation Legacy at Gettysburg

Preserving America’s battlefields is ongoing work, with misguided development projects regularly appearing around important sites enshrined in our national memory. The American Battlefield Trust is driven to save hallowed ground associated with the Revolutionary War, War of 1812, and Civil War. Our work — manifested in more than 55,000 acres protected forever – stretches from Massachusetts to New Mexico, but few sites carry as much resonance as Gettysburg.

Over the past two decades, the Trust has saved more than 1,230 acres on and around this sacred battlefield through the generous support of donors and partners. In doing so, we have significantly advanced restoration efforts that allow visitors to engage powerfully with our Civil War past and forge personal connections that only emerge after walking in the footsteps of yesteryear’s soldiers. The 42 transactions we have completed are located across the battlefield, but the cumulative impact of the Trust’s work can most clearly be seen in three areas:  ground associated with the first day’s battle, the land that made up the curve of the Union “fishhook” along the Baltimore Pike around Culp’s and Cemetery Hills, and acreage comprising the third day’s cavalry actions.

Impact on the First Day’s Battlefield

The First Day's field would be far less recognizable to any theoretical time-traveling Civil War soldiers were it not for the Trust. As it is, modern visitors are able to enjoy an improved experience thanks to our work.

The most ambitious project the Trust has ever embraced at Gettysburg occupies four acres astride the Chambersburg Pike and features a remarkable historic building — the Mary Thompson House, better known as General Robert E. Lee’s Headquarters.

The land played a pivotal role in bloody fighting on July 1, 1863, and remained a key position in the Confederate line for the rest of the engagement. After the battle, the site became a tourist attraction, eventually featuring a museum, motel and restaurant complex. But the site remained a high priority target for the preservation community. In 2014, when the Trust announced a massive, $6-million plan to purchase and restore the property to its 1863 appearance, the building was hailed as one of the most important, unprotected historic buildings in the nation.

Restoration was extensive – the hotel, parking lot and even the swimming pool were demolished. At the Thompson House, the Trust ripped out post-war walls to reveal an original fireplace and installed a historically accurate cedar shingle roof.  When we removed a 1920s brick and earth berm around the building, it uncovered two hidden basement windows. Guided by Alexander Gardner’s famous 1863 images of the house, we replicated the long-missing porch and, as a whimsical touch, a doghouse. On the grounds, we installed period fencing around a garden featuring medicinal herbs that would have been grown in the period and planted a 24-tree apple orchard.

In a festive event, the Trust unveiled the property in fall of 2016, and today’s visitors can enjoy a self-guided interpretive trail explaining the gripping events that took shape at the headquarters from July 1—3, 1863. Eventually, the Trust expects to transfer Lee’s Headquarters to the National Park Service for incorporation into the military park but will act as a steward in the interim.

Adjacent to the Lee’s Headquarters property sit 18 critical acres on Seminary Ridge, now permanently protected thanks to one of the most impressive preservation efforts in the Trust’s history. The $3.5 million transaction closed in late February 2019 and encompasses property that has remained largely unchanged since the battle. In fact, it had been part of the Lutheran seminary operating at the site in 1832. Of the total acreage saved, 11 acres to the west of Seminary Ridge Road were purchased outright, coupled with a conservation easement placed on seven acres to the east, along Chambersburg Pike.

This land witnessed the climactic scene of the first day’s fighting. The determined defense of Seminary Ridge by men from the Iron Brigade and 24th Michigan enabled the Union army to regroup and hold Cemetery Hill, key to the ultimate Federal victory at Gettysburg.

Further west along the Chambersburg Pike, in 2011 the Trust partnered with the Conservation Fund to protect 95 acres between McPherson’s Ridge and Herr’s Ridge once part of the Emmanuel Harman Farm. Once the Gettysburg Country Club, a 9-acre golf course frequented by former President Eisenhower, this land where some 15,000 Confederate soldiers — more than 20 percent of Lee’s army — faced battle is now part of Gettysburg National Military Park. In the summer of 2020, the Trust transferred a 37-acre property to the park – part of the 70 acres we have preserved around Barlow’s Knoll. Marking the far right of the Federal line, the land saw intense combat on July 1, 1863.

The Union Right and Other Pivotal Pieces along the Baltimore Pike

After the first day’s fighting, battle lines shifted, and the Union’s took the shape of a fishhook. The Trust has had a tremendous impact along this line at Cemetery and Culp’s Hills, as well as along the Baltimore Pike.

Early in 2021, the Trust added to its already preserved land on the north slope of East Cemetery Hill with two small, adjacent parcels along Baltimore Pike on the south slope — bordering McKnight’s Hill or Stevens Knoll, an area of the battlefield set aside for preservation in the 1860s. One lot included the historic James McKnight House, a landmark on this portion of the field. Tens of thousands of Union troops — up to a third of the Federal army — marched past this property on July 1 and 2. Notable fighting occurred here on the evening of July 2, as the 5th Maine Light Artillery helped to stymie a fierce Confederate assault against East Cemetery Hill long enough for reinforcements to arrive on the scene. Period documentation also demonstrates that Union casualties were temporarily interred all around this property prior to the opening of the Soldiers’ National Cemetery.

The Trust has saved a handful of smaller properties near the Gettysburg National Military Park visitor center, creating a powerful first impression for many park guests and preventing the commercial development that all but surely would have come.

The organization has also been a force for preservation on Power’s Hill, a position along the Baltimore Pike from which Union artillery batteries that poured devastating fire into Confederate forces attacking Spangler’s Spring and Lower Culp’s Hill on July 3. Included in this work is the 2016 purchase of 8.8 acres where the 1st New York Artillery was positioned to cover the Union right at Spangler’s Spring. These efforts and the transfer of land to the National Park Service allowed the Park to open the viewshed between Power’s Hill and Spangler’s Spring for the first time in a century.

Often overshadowed by famous incidents like Pickett’s Charge or the defense of Little Round Top, the clash of Union and Confederate cavalry units on the third day shows just how dynamic the Battle of Gettysburg truly was. This aspect of the battle — along with charismatic leaders, such as Generals George Armstrong Custer, J.E.B. Stuart and Elon J. Farnsworth — can be better remembered by way of the hundreds of acres that the Trust has saved at Gettysburg’s cavalry fields.

Our work to protect East Cavalry Field goes back decades, often involving partnerships with the Conservation Fund and Friends of the Nationals Parks at Gettysburg, a predecessor to the Gettysburg Foundation. It began in 1997 with protection of the 135-acre Hoffman Farm and continued into the early 2000s, safeguarding 45 acres at the Shea Farm and 103 acres at the Taney Farm. In 2005, the Trust rallied its membership to advocate against a proposal that would have located a casino just one mile from this important site.  Less well known is the Trust’s critical work in preserving some 86 acres of the South Cavalry Battlefield where the battle continued during and for hours after Pickett’s Charge.

Farther afield, visitors can picture the July 3 cavalry actions at the Fairfield Cavalry Field, where the organization saved 115 acres in 2003. During the third day’s battle, this land hosted a costly encounter between the 6th U.S. Cavalry and a Confederate cavalry brigade under the command of Brig. Gen. “Grumble” Jones.

While the Trust’s work at Gettysburg amounts to an impressive record of achievement, our efforts at this legendary site are far from over. 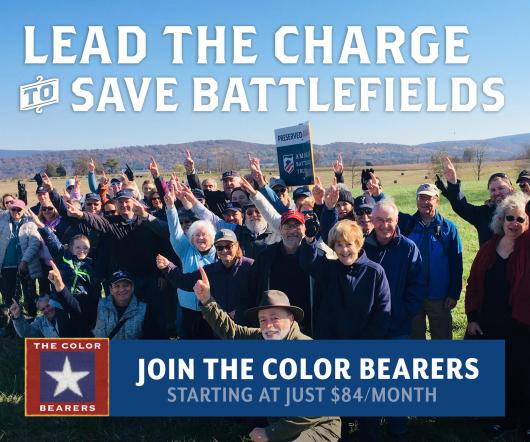 A Guided Tour of the Gettysburg Battlefield
How Well Do You Know the Battle of Gettysburg?
Gettysburg Itinerary for Educators
Seminary Ridge & Lee's Headquarters
East Cemetery Hill