Food and Beverage of the Revolutionary War Era

When Americans visit grocery stores today, they can purchase foods from around the world any time of the year. Meats, fruits, and vegetables can be grown in distant locations and shipped to grocery stores in the United States, thanks to refrigeration and preservation technologies, and modern transportation networks. But in the 1770s, there was no refrigeration, and the fastest methods of travel were horse-drawn wagons and sailing ships. The food and drinks that Americans consumed during the revolutionary period were produced locally and seasonally.

When settlers from Britain established colonies in North America, they brought crops and animals from their homeland with them, like wheat, barley, sheep, and cattle. They also grew and ate crops that were native to the continent, like corn and squash. Colonists hunted deer and turkey and fished for cod. European ideas of how to use the land to produce food were very different from the ways that Native peoples used the land. Colonial practices like fencing off the land for farming or pastures, and letting animals graze freely in forests, caused serious disruptions to Native ways of life and were frequently the cause of conflicts between settlers and indigenous people.

There was no way to keep meat, fruits, or vegetables fresh for long periods of time, so the foods that colonists ate changed based on what was available during each season. Meat could be smoked, or it could be salted – rubbed with salt and then store in barrels topped off with water. Fruits and vegetables could be pickled or dried. Some fruit might be made into jam, or baked into pies which could be preserved. These preserved foods would be eaten during the winter, when fresh food was less readily available. Without efficient transportation networks, or the technology to keep cargo fresh over long distances, the colonists mostly ate things that they could acquire from their own farms, gardens, or nearby markets.

Americans in the Revolutionary era drank a lot – three times as much as modern Americans! This was partly because clean, fresh drinking water was not always easy to find. Alcoholic beverages like beer, cider, rum, and whiskey were safer alternatives to potentially contaminated rivers, streams, or wells. George Washington established a distillery on his Mount Vernon estate, which produced nearly 11,000 gallons of whiskey in one year. He, and other wealthy Americans, also enjoyed imported drinks like Madeira, a fortified wine. Colonial Americans drank tea, like their fellow Britons across the Atlantic Ocean. The drinks of colonial America became political in the years before the outbreak of the Revolutionary War. The British Parliament attempted to enforce the collection of taxes on molasses, a key ingredient in the making of rum, and on tea. These efforts at increasing imperial authority in the colonies sparked protest and resistance, including the Boston Tea Party in 1773. As the Revolution went on, coffee began to replace tea as the American drink of choice.

When the Revolutionary War broke out in 1775, soldiers on both sides had to be fed. Britain faced a serious challenge: it had to ship most of the supplies for its armies, including food, across the Atlantic from Britain. This long supply line hampered British operations throughout the war. On the other side of the battlefield, the Continental Congress set the daily rations of the Continental Army soldiers at one pound of bread, half a pound of beef, and half a pound of pork (or one and one-quarter pound of beef, if no pork was available), one pint of milk, one quart of spruce or malt beer, and one gill (four ounces) of peas, beans, or another vegetable. The soldiers were also supposed to receive six ounces of butter and half a pint of vinegar per week. Throughout the war, Washington’s army struggled with supply shortages. At Valley Forge, the men often made flavorless “firecakes” by cooking flour mixed with water over an open fire.

After the Revolutionary War, George Washington envisioned the new nation becoming “a storehouse and granary for the world.” Today, the United States is the largest exporter of food in the world. 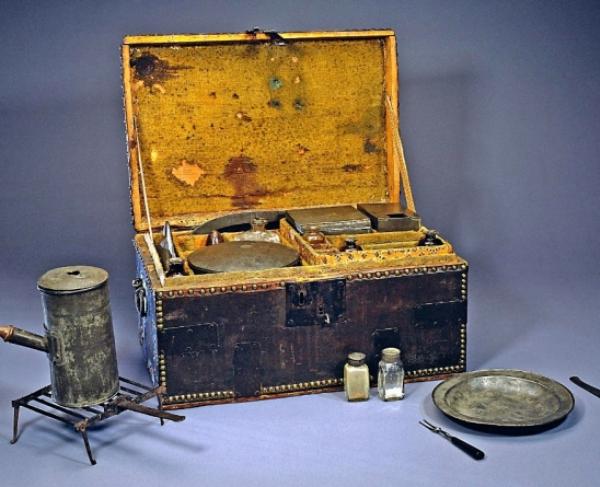 Getting Food in the Continental Army