Wounded at Savage's Station. This Union hospital was overrun by Confederate troops the day after this image was captured.

In an age before modern medicine, getting sick from disease was a scary but normal part of life. There were several common illnesses that were found throughout the United States impacting people of all walks of life, young and old, rich, and poor. Without the knowledge of what caused people to get sick, and medicines that were sometimes ineffective, even a minor illness could prove deadly. With the technological advances made in the 20th century, some of these diseases have been eradicated or have effective medicines that rendered these diseases much less deadly than they were 300 years ago.

Smallpox virus was one of the deadliest diseases in the 18th century. It was likely brought to the colonies by British immigrants or African slaves in the 17th century, but because colonists were spread out, outbreaks were infrequent. The virus spreads through the air and proved to be deadly since it can take up to two weeks for an affected person to show symptoms allowing the virus to spread rapidly. Symptoms of smallpox include fever, headache, fatigue, backpain, vomiting, and painful, pus-filled blisters covering the body. Once the blisters healed, scabs formed and once they fell off the body, pitted scars are left behind.  However, unknown at the time, those who contracted and survived the virus gained immunity and could not contract it again. In 1751, George Washington contracted smallpox while in Barbados. It made him very sick for a month, but he survived, gaining immunity which came in handy during the American Revolution. When soldiers concentrated from all over the colonies and various parts of Europe, smallpox epidemics continuously broke out between 1775-1782. This proved to be more deadly than the British soldiers for 3 out of 10 soldiers who contracted the virus died as a result. To curb the epidemic, Washington ordered that all his troops be inoculated in 1777. The process of inoculation involved taking a scab that had fallen off a smallpox patient and rubbing it into a cut on a healthy patient’s arm. The patient would get sick, but not as sick as contracting the virus naturally and once they recovered they would to be immune to the disease. By the 19th century, a vaccination had been discovered by giving patients cowpox, a similar virus found in animals that gave immunity to smallpox. This reduced the amount of smallpox cases recorded, especially during times of war when large groups of people gathered in the armies. For example, from May 1861 to June 1866, there were only 12,236 recorded cases of smallpox in the Union Army which number millions. Through vaccinations, the smallpox virus has been considered eradicated since 1980.

Typhoid Fever is an intestinal disease caused by contaminated food and water, often caused by unsanitary living conditions. Since these conditions were often found throughout military camps, particularly during the Civil War, it became referred to as “camp fever”. Common symptoms include fever, muscle aches, headache, stomach pain, and diarrhea. Severe cases resulted in delirium, lesions often referred to as “rose spots”, paralysis, and death. During the American Civil War, typhoid fever was one of the most feared diseases throughout camp, resulting in about ¼ of the deaths caused by disease. Unfortunately, physicians of the 19th century did not understand the cause of typhoid fever and so they could only treat the symptoms. Common treatments for the disease were medicines such as opiates, turpentine, quinine, capsicum (an herbal medicine), and calomel (mercury chloride), as well as bleeding and blistering. However, many of these treatments proved ineffective to treating the disease contributing to the higher mortality rate. While many soldiers died of the disease, their sacrifice was not in vain. Union surgeons were able to study the disease after their deaths and record their findings, helping later generations of medical practitioners to create two vaccines for typhoid fever and ultimately making the disease something rarely encountered in the modern era.

Dysentery was another common disease found in the 18th and 19th centuries. Like typhoid fever, dysentery was commonly caused by bacteria or parasites most likely found in poor living conditions or contaminated food or water. During the Revolutionary and Civil Wars, it was a common disease found in camps and acquired humorous names created by soldiers, particularly during the Civil War. Other common names for dysentery included “the runs”, the “Tennessee Trot” or the “Virginia Quickstep”. A bowel infection, dysentery was marked by bloody diarrhea, fever, nausea, and cramps. Because physicians did not know what caused the disease, they treated the symptoms, often using purgatives like turpentine or castor oil, which in fact, only made the problem worse. The disease was not always fatal. However, it caused many deaths because of time and the treatments used. In October 1863, Private John Leopold of the 74th Pennsylvania was admitted to the hospital with dysentery. Surgeons tried medicines such as turpentine, lead acetate, aromatic sulfuric acid, tincture of opium, silver nitrate, belladonna, and calomel to treat the disease, but unfortunately, he died after twelve days of treatment.

Malaria is an infectious disease caused by parasites transmitted by mosquito bites. Common symptoms of the disease are fever, tiredness, vomiting, headache and in severe cases, yellow skin, seizures, and death. Cases of malaria were much more prominent in the South in the 18th and 19th centuries with the warmer, wetter climates that mosquitos thrive in. During the American Revolution, mosquitos caused a malaria epidemic in the British Army while stationed in South Carolina that caused about 50% of the army to catch malaria. To avoid “the fatal sickness which so nearly ruined the army” another year, Cornwallis moved his troops to Yorktown in 1781, ultimately contributing to the siege that would end the Revolution. Malaria was again a problem the Civil War when soldiers again encountered the swampy, wet areas of the Virginia Peninsula in 1862. However, by the end of the 19th century, studies were conducted on malaria, and physicians didn’t know what caused the disease until 1880. In the 1860s, there were two treatments found to help alleviate the symptoms: arsenic and quinine. During the Civil War, many soldiers were issued a ration of quinine, often mixed with whiskey to cover the unpleasant taste. This method proved effective, and quinine is still used today to treat the disease.

Yellow Fever is another disease transmitted by mosquitos, but while malaria is a disease transmitted by a parasite, yellow fever is a virus, meaning that it cannot be treated with medication, but instead the virus must run its course in the afflicted. Throughout 18th and 19th century America there were several epidemics of yellow fever that proved catastrophic, especially in cities such as Philadelphia and New Orleans. In 1852, a yellow fever epidemic spread throughout the United States. 8,000 peopled died in New Orleans in one summer alone. One of the reasons that the virus spread so rapidly was because most people who were infected did not show symptoms. However, those who did display symptoms such as fever, chills, body pain and vomiting were at higher risk of death. One of best methods used to try and curb the spread of the virus was quarantine. In 1862, Wilmington, North Carolina was struck by a yellow fever epidemic compounded by all the refugees who were fleeing into the city. As a result, many residents of Wilmington fled to escape the disease, some leaving their slaves behind. Travel between Wilmington and the nearby town of Fayetteville was suspended and any persons traveling through were subject to a 48-hour quarantine and a medical inspection. By the end of the epidemic that lasted several months, out of 4,000 people in the city, 650 people perished. Today, yellow fever is a rare disease in developed countries and if contracted, still the only treatment is to rest and wait.

Measles is a deadly virus that was spread very easily in the 18th and 19th century. However, most of the sufferers who contracted the virus were infants and children. As a result, it was often ignored throughout history because it was considered a childhood disease and viruses such as smallpox and yellow fever were much more widespread. The symptoms of measles are like smallpox; victims would have a fever, cough, runny nose, and eventually a rash of red spots that could cover the entire body. Also, very similar to smallpox, if someone survived the virus, they are forever immune. During the 18th and 19th centuries, there were several outbreaks of measles in cities. In 1713, a measles epidemic spread through Boston with a devastating mortality rate. The household of Puritan Minister, Cotton Mather was destroyed when five of eleven members died in a month in a half. The virus also flared during times of war. With soldiers coming together from both urban and rural areas, people who were never exposed to measles in their community were highly susceptible to the disease as it spread through camps. By the end of the Civil War, 67,000 Union soldiers contracted measles and more than 4,000 died. As a virus, there is no treatment for measles, but today there is a vaccination available to help prevent and lessen the severity of the symptoms. 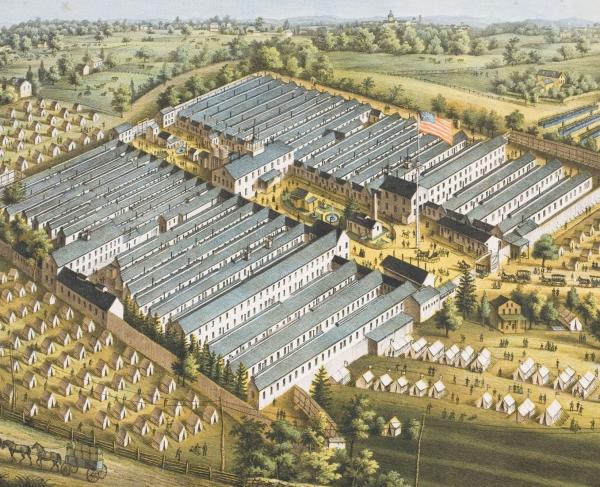