On the night of July 4-5, the Confederates marched back to a line that once again had already been prepared. Two weeks earlier, when the army was at Kennesaw, work had begun under the direction of Joseph E. Johnston's chief of artillery, Brig. Gen. Francis A. Shoup. According to Shoup, Johnston had told him "it was but a question of time, and that a short time" before the army would retreat across the Chattahoochee River. Chagrined, Shoup asked whether he might supervise construction of fortifications on the north bank of the river at the railroad bridge. Johnston, eager for anything that would delay his inevitable retreat across the Chattahoochee, agreed. Thereupon Shoup directed the army's engineers and hundreds of slaves in tree-cutting, digging, building log-and-earth infantry forts. There were some three dozen of these "Shoupades" (Gen. G.W. Smith's term), which were connected by log palisades for more infantry and studded with artillery redans, all arced in an almost six-mile line around where the Western & Atlantic Railroad bridge crossed the river near Peachtree Creek. During the night of July 4-5, Johnston's troops marched into these defenses.

Each shoupade was a log-and-earth fort shaped like an arrowhead pointed at the enemy. The outside walls were almost vertical, built with logs laid horizontally up to a height of sixteen feet. Dirt ten to twelve feet thick was packed in between the outer and inner log walls. Inside was a banquette, or firing platform, for infantry. Each fort was intended to be manned by 80 riflemen. The 36 shoupades were built 60 to 175 yards apart. Between them was constructed earthen redans for artillery, two guns in each. Log stockades eight feet high connected shoupades and redans. The key defensive element, to Shoup, was that shoupades and redans were placed so that troops in each position could pour enfilading fire toward the next, all the way down the line.

Union Gen. William T. Sherman was frankly surprised when his morning picket reports informed him that Johnston was entrenched near the river. "No general, such as he," the Federal commander had written on the 3rd, referring to Johnston's trademark cautiousness, "would invite battle with the Chattahoochee behind him." He had to see for himself on the morning of the 5th that the Rebels had indeed not fled across the river. He was content that day with Gen. George Thomas' drawing closer to the enemy's new line. James B. McPherson and John M. Schofield were probing the right along Nickajack Creek, while cavalry on both flanks fanned out toward the Chattahoochee's various crossings.

These crossings were numerous: six ferries in the fourteen downstream miles from the Western & Atlantic bridge, another seven fords or ferries upstream, plus a wagon bridge at Roswell, and another one six miles farther up at McAfee's. All these possibilities for an enemy cavalry crossing had long drawn Gen. Johnston's attention. As of July 4, at least a few of these crossings, especially downstream (because Sherman seemed to show a disposition to flank by his right), had little guard posts, some fortified. For example, at Adaholt's Ferry, ten miles down from Johnston's river line, the one hundred or so dug-in state troops repelled a Maj. Gen. George Stoneman's Union cavalry reconnaissance on the afternoon of July 3; two brigades of Confederate cavalry were sent downriver to reinforce the local troops defending the various crossings. On the other flank Sherman's cavalry was doing the same thing, feeling in that direction towards Roswell. 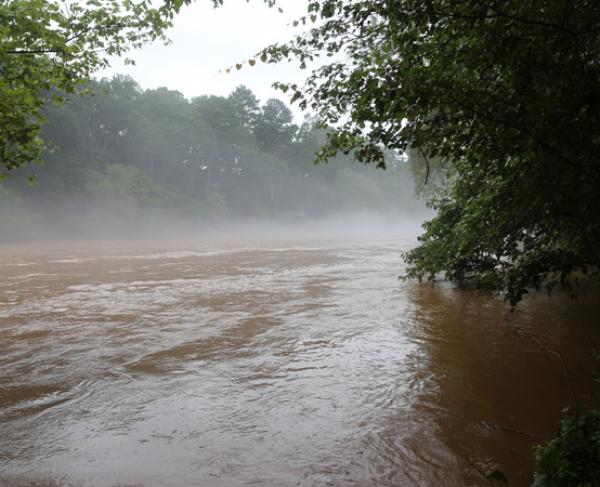