This monument to the 1st Minnesota sits upon Cemetery Ridge at the location where the regiment began its charge on July 2, 1863. Surrounded by Veterans of the regiment, the monument was dedicated on July 2, 1897.

“I had no alternative but to order the regiment in. We had no force on hand to meet the sudden emergency. Troops had been ordered up and were coming on the run, but I saw that in some way five minutes must be gained or we were lost. It was fortunate that I found there so grand a body of men as the 1st Minnesota. I knew they must lose heavily and it caused me pain to give the order for them to advance, but I would have done it even if I had known every man would be killed. It was a sacrifice that must be made. The superb gallantry of those men saved our line from being broken.”

These words were written by Union Maj. Gen. Winfield Scott Hancock and reveal the desperate situation of the Union line during the latter part of the sledgehammer attack inflicted by the Confederate forces of Gen. James Longstreet on July 2, 1863. Hancock’s response to yet another wave of Confederates coming down the Emmitsburg Road ridge heading toward the weakest point of the Union line is one of the best-known stories from the Battle of Gettysburg. The 1st Minnesota regiment formed in 1861, one of the first offered to President Abraham Lincoln for service by Gov. Alexandar Ramsey, and had already seen its share of tough scrapes in the war, beginning at the First Battle of Bull Run. Reduced in size to just over 300 men by 1863 and placed in the center of the Union line on July 2, with two of its companies detached, the remaining 262 men ran to the emergency. Forty-seven returned unscathed. “Not a man waivered,” said one participant.

The story of the 1st Minnesota doesn’t stop with their famous charge on July 2 as the 47 men returned to the main Union line, passing by their dead and wounded comrades. It continues at the height of Longstreet’s July 3 assault against the center of the Union line.

Lt. William Lochren, recounting the experiences of the 1st Minnesota in 1890, described a scene “of shells screaming over our heads and striking and bursting among our artillery, where caissons were exploding every few minutes” and “the satisfaction of detecting the sound of bursting caissons on the enemy’s side as well.” Some of the men of the 1st Minnesota amazingly took the opportunity during the artillery duel to catch up on some much-needed sleep!

Watching the long lines of Confederate infantry come across the field, Lochren later described the scene as one of “admiration at the steady and resolute manner in which they came on.” Once the Confederates reached the Union infantry line, however, the time was over for admiration, and heavy, close combat became the order of the day. In the melee, the men of the 1st Minnesota ran toward the famous copse of trees to help other Federal units. At the height of the fighting, one man, Marshall Sherman of Company C, was able to capture the flag of the 28th Virginia regiment. Capt. Nathan Messick, who had taken over the Minnesota regiment after the heavy casualties of July 2, was killed in this confrontation, along with the captain of Company C. Lochren later would plainly state in a speech, “[T]hus ended the serious fighting of the battle of Gettysburg.”

The superb gallantry of the men of the 1st Minnesota did save the Union line from being broken — and not only on July 2, as they assisted with the effort on July 3 as well. For that effort, we can agree with General Hancock: “No soldiers on any field, in this or any other country, ever displayed grander heroism.” 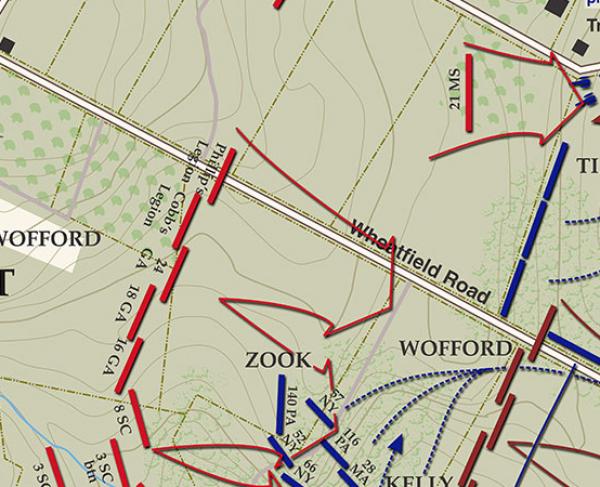