Battles of Fort Bowyer in the War of 1812 | American Battlefield Trust Skip to main content
SHARE:
War of 1812  |  Article

In April 1813, after having seized the port city of Mobile in West Florida (today Alabama) from Spanish hands, the United States promptly began the construction of a fortification to protect its bay from a possible British attack along the Gulf Coast. In the following months, under the supervision of Colonel John Bowyer, Fort Bowyer was completed. Although being relatively small in size and only made from sand and logs, the fort, located on Mobile Point, a peninsula with a commanding position overlooking the entrance to the bay, still offered ample protection to the port with its complement of 14 cannons jutting from its crescent-shaped seaward bastion. Despite its immense strategic importance, eventually, in the early summer of 1814, as the perceived threat of British invasion in the South decreased, the fort was abandoned. However, by August 1814, as the British began occupying Spanish-held Pensacola in order to stage an attack on the Gulf Coast, 160 men of the 2nd U.S. Infantry under the command of Major William Lawrence were sent to re-garrison the fort.

As the Gulf Coast Campaign commenced and the British began preparations to attack New Orleans, Fort Bowyer was designated by British commanders as a principal target for the expeditionary force to attack. The British hoped that by taking Fort Bowyer and, along with it Mobile, Louisiana could be cut off from overland trade with the East Coast of the United States. With Mobile under their control, the British could then march on to Natchez, upriver of New Orleans, cutting off access to the city via the Mississippi River. Without access to trade and reinforcements, the city of New Orleans would then be bound to fall to the invading British force without significant resistance.

Understanding its significance were it to be taken, on September 12, 1814, Royal Navy Captain William Percy landed 225 royal marines and Native Americans 9 miles east of the fort along the peninsula. Two days later, on September 14, this land force attacked from the landward side against Lawrence’s garrison but was easily repulsed in the ensuing action. The next day on the 15th after headwinds had died down, a squadron under Percy consisting, of the HMS Hermes, HMS Sophie, HMS Carron, and HMS Childers with a total of 68 cannon, crossed into range of the fort in order to bombard it. However, only able to return fire with the Hermes and Sophie, Percy’s attack soon fell apart. After two hours of exchanging fire between the fort and the British squadron, Percy’s flagship Hermes ran aground directly under the fort within musket range, forcing Percy to abandon and scuttle the ship. After being rescued by the Sophie while under fire, Percy ultimately decided to call off the attack and retire out of range of Fort Bowyer. This botched and uncoordinated attack cost the British dearly, having sustained around 70 casualties and losing their flagship in comparison to the only ten casualties taken by the American defenders. Disillusioned that the fort could be taken as easily as they had hoped, the British decided to carry on with the campaign by attacking New Orleans directly.

After their decisive defeat at the Battle of New Orleans in early January of 1815, the British returned to their original plan, once again focusing their attention on taking Fort Bowyer. Since the first failed British attack, American General Andrew Jackson had recognized the strategic importance of the fort, ordering its defenses and garrison to be strengthened. Now with 375 men of the 2nd U.S. Infantry and 22 guns under the command of Lawrence, Jackson boasted that “ten thousand men cannot take it.” Despite the confidence of his commanding general, Lawrence felt no more secure in his position, recognizing exposed nature and light defenses of the landward approach to the fort.

In early February of 1815, the British commenced their attack upon Fort Bowyer for a second time. However, unlike the first British attack, this time the British focused all of their resources on the fort. On February 7, the British began their attack, surrounding and bombarding the fort’s seaward side with warships. The following day, with some 5,000 men and artillerists, British General Lambert landed 7 miles east of the fort along the peninsula. Shortly after landing, Royal Engineer Colonel Burgoyne began construction under constant American fire of a 100-yard siege line from which canons could bombard the fort’s undefended side. Despite losing 10 men, the line was completed and in the following days, it was bristling with British 11 guns and 3 Congreve rockets. Eventually, on February 12 after an intense bombardment, General Lambert offered the terms of surrender to the American defenders, imploring them to lay down their arms and avoid a senseless slaughter. Lawrence after holding out for an admirable 5 days against an overwhelming British force, understanding the vulnerable disposition of his fort, surrendered himself and his men. However, as the British would soon learn, this victory and the lives lost in taking the fort would be in vain. On the 13th, before the British could move onto Mobile and execute their plan, a British ship came bearing the news of the Treaty of Ghent and the termination of hostilities between the Americans and British. Following this information, the British withdrew, thus ending the final campaign of the War of 1812. 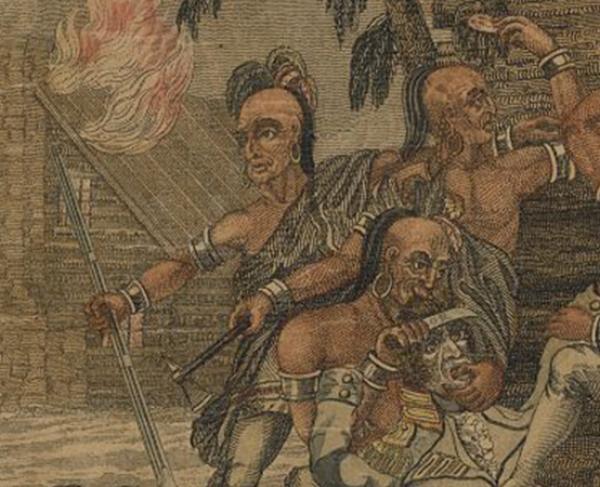 A Tribute to defenders of New Orleans
Andrew Jackson: Old Hickory - Adored and Despised
10 Facts: The War of 1812
A Brief Overview of the War of 1812