The Battle of Flamborough Head

Where the Continental Navy got its sea legs.

Following the American victory at the Battles of Saratoga, Britain’s long-time rival France formed an official alliance with the American rebels. The Kingdom of France had already been shipping supplies to the Continental Army in June of 1775, but on February 6, 1778, the Franco-American Treaty was signed. The treaty required that the Kingdom of France provided the 13 Colonies with military aid. This aid included forms of financial aid, providing equipment and other provisions, and supplying the Continental Army with the resources of the French military. The French Navy, especially, helped to give the Continental Army a standing chance against the battle-hardened and formidable British Royal Navy.

In 1779, Scottish-born patriot naval captain John Paul Jones was making a name for himself in the Revolutionary War. As the infamous captain of the USS Ranger, Jones successfully captured the HMS Drake in a duel in the North Channel between Ireland and Scotland, which became a large symbol of the naval patriot cause. As a seasoned captain, Jones was placed in command of sailing the Duc de Duras, renamed the USS Bonhomme Richard by Jones after Benjamin Franklin’s pen name Poor Richard. The former merchant ship was given to the Continental Navy by the French. Jones sailed from Lorient, France to Eastern England on August 14, 1779, with the Pallas, Vengeance, and the Alliance.

Sailing north, Jones’ small squadron sailed to the coast of Yorkshire, England at Flamborough Head on September 23, 1779. In the area, a group of 40 British merchant ships was being escorted by the HMS Serapis and the Countess of Scarborough. Maneuvering behind the convoy, the ship’s crew began preparing for a fight. Cannons were loaded with double shot and grapeshot. The crew began to load their muskets and sharpen their blades. Jones had the Pallas ride in his wake to deceive the British of their numbers. As the darkness of night began around 6:00 pm, the HMS Serapis hailed the USS Bonhomme Richard. Captain Richard Pearson, captain of the HMS Serapis asked John Paul Jones, “What ship is that?” Jones replied, “I can’t hear you!” Pearson then demanded, “What ship is that? Answer at once, or I shall be under the necessity of firing into you.” The two stared each other down, and after no response from Jones, the two ships fired at almost the exact same time, splattering each ship’s façade with holes and splintered wood. The Battle of Flamborough Head had begun.

As the HMS Serapis took off, Jones realized that he was outgunned and outmaneuvered. The USS Bonhomme Richard was a refurbished merchant ship. It was constructed in 1765 and had previously made two voyages to China. It was older, slower, and a less capable ship than the newer HMS Serapis. When Jones fired the first volley of cannons, many of his cannons exploded within the ship. Jones realized that the only way to win the engagement was to board the ship and capture it. Repeatedly, the two ships attempted to out-maneuver each other. After three attempts to board the HMS Serapis, the HMS Serapis hailed Jones once again and asked for his surrender, saying, “Has your ship struck?” Jones replied with one of the most famous quotes of the American Revolution, “I have not yet begun to fight!” After five more attempts to board the HMS Serapis, the two ships were locked into hand-to-hand combat. The HMS Serapis’ jibboom, the front end of the ship, caught onto the rigging of the USS Bonhomme Richard, and Jones instructed the crew to attach to the Serapis as quickly as possible. As the crew began to pull the Serapis into its jaws, Captain Richard Pearson had the anchor dropped in hopes that the Serapis could escape the ongoing boarding. The force of the anchor plummeting into the sea caused the Bonhomme Richard to rotate and lock both ships in opposite directions.

For approximately four hours, the two ship’s crews fought a bloody battle. Tainting the British sea red, spectators watched on in horror as the American “pirate” ripped the Serapis apart at the seams. Jones was widely considered throughout the British Isles as a pirate and just as savage and terrifying as other pirates from the past hundred years. Jones took control of a nine-pound cannon on the deck of the Bonhomme Richard, and shouted orders and rallying cries to his men. The hand-to-hand combat and small arms fire of the Americans was deadly and accurate. The Bonhomme Richard was taller than the Serapis, and so the Bonhomme Richard’s crew shot at the British sailors like fish in a barrel directly on the deck. As the night lingered, the battle still raged on. At 8:30 pm, the Alliance fired shots directly into both the Bonhomme Richard and the Serapis. Jones hailed the Alliance, unaware that it was the Alliance, and asked for them to stop firing, thinking that it was a British vessel that was coming to the aid of the Serapis. The attack of the Alliance was intentionally meant to hit the Bonhomme Richard, and Captain Pierre Landais hoped to sink the Bonhomme Richard to steal the glory for sinking the Serapis for himself. Both ships began to burn and sink, and the flag on the Bonhomme Richard appeared to have been shot away. The master-at-arms, believing that Jones was somehow wounded, began to shout that they struck their colors, a naval term for surrendering. The British shouted towards the Bonhomme Richard and asked if they truly were surrendering. According to sailors on the Bonhomme Richard, Jones said in reply to the British, “I may sink, but I’ll be damned if I strike.” American sailors threw a grenade onto the Serapis, which caused a chain reaction that caused the Serapis’ gunpowder storage to ignite and explode in the lower deck. After another barrage by the Alliance, Jones ordered the release of prisoners in the brig and implored them to help save the ship to save their own lives. At 10:30 pm, Captain Pearson surrendered the HMS Serapis, after suffering 117 casualties. When Captain Pearson climbed aboard the Bonhomme Richard, he said to Jones, “It is with the greatest reluctance that I am now obliged to resign this, for it is painful to me, more particularly at this time, when compelled to deliver up my sword to a man who may be said to fight with a halter around his neck!" Casualties for the battle are inconclusive, but the Americans suffered approximately 170 casualties, while the British suffered approximately 117 casualties and 2 captured ships.

After the surrender of British forces, Jones inspected the Bonhomme Richard. The ship had taken on five feet of water, and there was no way to repair the ship. Jones and the crew abandoned the Bonhomme Richard and boarded the Serapis. Jones sailed with his squadron to Texel, a small island off the coast of Holland. When he arrived in Amsterdam, the Dutch nicknamed him “The Terror of the English.” On December 27, Jones took command of the HMS Serapis, renaming the vessel Serapis, and gave it to the French Navy as a prize ship. Louis XVI of France granted Jones the rank of Chevalier and received an elegant sword from the King of France. Louis XVI credited Jones with maintaining “The Freedom of the Seas.” The pyrrhic victory over the Royal British Navy at the Battle of Flamborough Head further solidified the alliance and friendship of the American and French people. The next Franco-American naval victory as grandiose as Flamborough Head would be the Siege of Yorktown two years later at the mouth of the Chesapeake Bay in southeastern Virginia. John Paul Jones’ bravery and valor at the Battle of Flamborough Head inspired many and is appropriately nicknamed the Father of the American Navy. 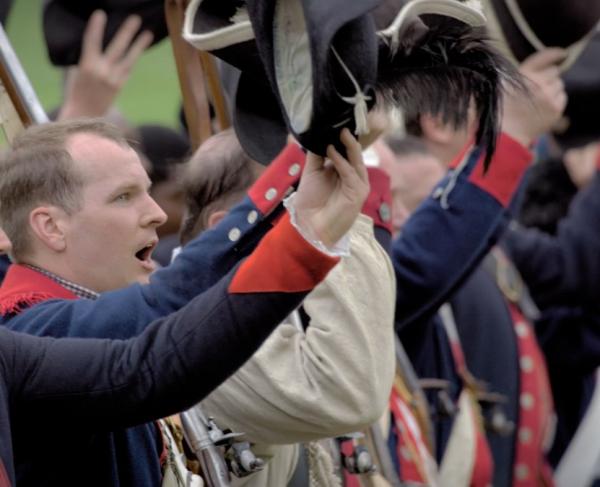