You can help save 28 acres at two critical Eastern Theater Battlefields at Gettysburg and Bristoe Station! But we must act quickly.

To preserve the stories these battlefields tell for all time and create a legacy that will last for generations, we need your help in raising the final $103,500 by May 15th.

Both of these battlefields face the imminent threat of residential and commercial development — unfortunately, pieces of each have already been lost. The good news is that we can still save crucial battlefield acres at both of these sites.

Thanks to a generous contribution from the Gettysburg Foundation and anticipated funding from the federal American Battlefield Protection Program and other state and local sources, we can save 28 acres of battlefield land with a $12.87 to $1 match!

But only if we act quickly! We only have until May 15 before we need to close on the parcel we’re trying to save at Gettysburg.

Please make your most generous gift today to help raise the $103,500 we need to save these 28 critical acres at Gettysburg, Pennsylvania and Bristoe Station, Virginia.

With the closing date rapidly approaching for 6 crucial acres at Gettysburg, and not wanting to lose another minute to preserve 22 more acres at Bristoe Station, we are seeking your support to help preserve 28 acres at two Eastern Battlefields, forever!

Abutting the Baltimore Pike and adjacent to land preserved by both the National Park Service and the American Battlefield Trust, this 6-acre parcel served as a key Union position near Culp’s Hill.

On the battle’s first and second days, tens of thousands of Union troops, and hundreds of cannons and other materiel of war moved toward battle zones along the western edge of this tract.

On July 2nd, Union cannons were positioned just west of the tract and sent shells screaming over this land to support Union forces on nearby Culp’s Hill, where the battle raged between General Edward “Allegheny” Johnson’s Confederate division (the command formerly held by General Stonewall Jackson) and Federal forces led by General Henry W. Slocum.

The next day, Federal troops reinforced Culp’s Hill and multiple 12th Corps units from New York and Maryland were positioned upon and moved across the tract as they charged into the fray, helping to stymie Confederate thrusts near Pardee Field, Culp’s Hill, and Spangler’s Spring.

Preserving this tract will not only add to our success along the Baltimore Pike but also fill in most of a key “hole in the donut” of preserved land between the Gettysburg Museum and Visitor Center complex with National Park Service land around Culp’s Hill.

If we are able to save this land by May 15, we will have the chance to present new opportunities for interpretation.

You may recall that just a few years ago, dedicated individuals just like you eliminated the threat of an industrial park on this battlefield by saving a tract that will double the size of the existing county battlefield park! Thanks to the timely and generous support from our members, we have saved 286 acres of hallowed ground from being paved over, developed, and lost forever. But we’re not finished yet.

Today, we have the opportunity to preserve 22 acres that witnessed one of the most lopsided victories of the war.

Following the Union victory at Gettysburg, Federal forces spent the remainder of the summer of 1863 playing cat and mouse with Lee across central Virginia. By mid-October in response to a Confederate offensive, the Army of the Potomac changed course and made for Centreville, Virginia, so that General George G. Meade could protect his supply line and shield Washington.

On October 14, near the Orange & Alexandria Railroad, General A.P. Hill caught sight of what he believed were the final two Union corps crossing Broad Run. Hill saw an opportunity and tried to push his perceived advantage but incomplete reconnaissance proved disastrous for the Confederates.

Hill’s troops maneuvered directly into the Union 2nd Corps, led by General Gouverneur K. Warren (another veteran of Gettysburg). Realizing Hill’s mistake from afar, Warren had ordered his troops to lie in wait in a defensive position behind the embankment formed by the railroad.

The results were devastating. In just about an hour’s time, more than 1,380 Confederate troops became casualties of the Union trap.

After the battle, Hill approached Lee to apologize for his error. Lee cut him off, famously saying only: “Well, well, general, bury these poor men and let us say no more about it.”

The parcel we can save today marked the position of Union troops led by General Joshua Owen, who acted as the main force to repel the Confederate attack. If we protect these acres now, we can preserve a crucial piece of the story of Bristoe Station.

It’s also worth mentioning that these same 22 acres had seen action about a year earlier in the Battle of Kettle Run, a part of the Second Manassas Campaign.

Save 28 Acres at Gettysburg and Bristoe Station

Both of these battlefields face the imminent threat of residential and commercial development — unfortunately, pieces of each have already been lost.

As more and more of our nation’s battlefield land faces the threat of destruction from development, I’m reminded of the absolute necessity of acting swiftly to ensure we don’t lose a single hallowed acre more.

Please make your most generous gift today to help raise the $103,500 we need to save these 28 critical acres at Gettysburg and Bristoe Station. Every dollar you are able to give today will be worth $12.87 in preserved battlefield land.

In my twenty-plus years saving battlefields, I’ve learned many things, but here’s one that stands out: you can’t save land without allies. Just as you can’t go into battle without your comrades beside you, you can’t preserve these important battlefields without friends. And that’s where you come in.
David N. Duncan, American Battlefield Trust President
Read David's Letter 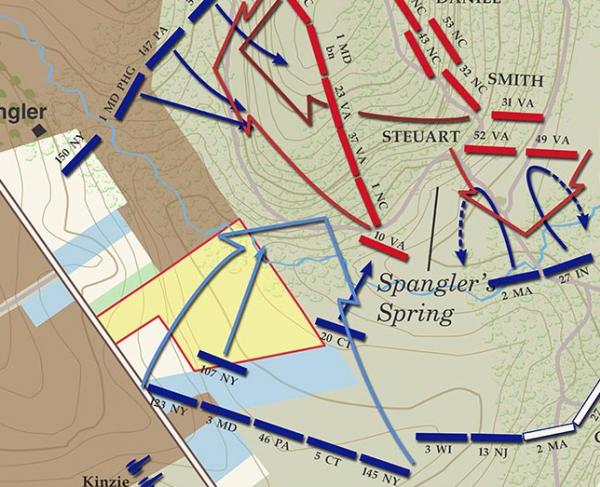