(Murfreesboro, Tenn.) — The American Battlefield Trust has reached an agreement with O’Reilly Auto Parts to acquire and preserve 42 acres of prime battlefield land at the Stones River battlefield in Tennessee. The purchase price of $4.0 million will be mostly funded with federal and state matching grants; the Trust is seeking to raise $170,000 in private donations for remaining costs.  To date, the Trust has saved 3,516 acres throughout the Volunteer State, including 26 acres at the Stones River battlefield.

“After facing the potential loss of historic property at Stones River some four years ago, I am elated with the extraordinary opportunity to now preserve and protect this hallowed ground,” said James Lighthizer, Trust president.  “I want to thank O’Reilly Auto Parts for its willingness to see this property set aside for preservation, and I am proud that we could work together to further protect a battlefield that witnessed key Civil War action.”

The tract to be acquired by the Trust is located in the battlefield’s core, and its protection will help connect two previously separated wings of the battlefield preserved by the National Park Service.  Uniting these adjacent portions of the battlefield will help paint a more complete picture of the conflict.   It will also provide a more cohesive experience to visitors of Stones River National Battlefield, which last year saw its fourth highest annual attendance in the park’s 92-year history.

"The Friends of Stones River National Battlefield is elated with the American Battlefield Trust's announcement of its efforts to date to preserve more land associated with our historic Civil War battle,” said Friends president Ed Arning. “This battlefield is a shining star among its peers as we continue to see more than 250,000 visitors annually. Visitors are constantly reminded as they walk, bike and ride through the battlefield the importance of preserving our American history. We look forward to supporting the American Battlefield Trust in any way we can.”

Much of the Stones River battlefield has been lost forever to development, making the 42 acres to be acquired by the Trust the largest unprotected tract still available for preservation. Previously owned by the General Electric Corporation, this land faced an uncertain fate until its new owner, O’Reilly Auto Parts, agreed to sell it to the Trust, a tremendous victory for battlefield preservation. The historically significant property has long been one of the highest preservation priorities for the Trust and its Tennessee partners.

The three-day Battle of Stones River was fought in bitterly cold rain and sleet, from December 31, 1862 through January 2, 1863.  Maj. Gen. William Rosecrans’ Union force met Gen. Braxton Bragg’s Confederate Army just north of Murfreesboro, and the inevitable engagement erupted on New Year’s Eve.  The heavy fighting continued on both sides for three days and, while a tactical draw, would prove to be a key strategic Union victory.  Bragg abandoned the field on January 3 and, with it, Confederate aspirations for control of Middle Tennessee.  Of the more than 80,000 soldiers who struggled at Stones River, nearly a third – 24,645 men – were casualties by the end of the battle.

The American Battlefield Trust is dedicated to preserving America’s hallowed battlegrounds and educating the public about what happened there and why it matters today.  The nonprofit, nonpartisan organization has protected more than 51,000 acres associated with the Revolutionary War, War of 1812 and Civil War.  Learn more at www.battlefields.org. 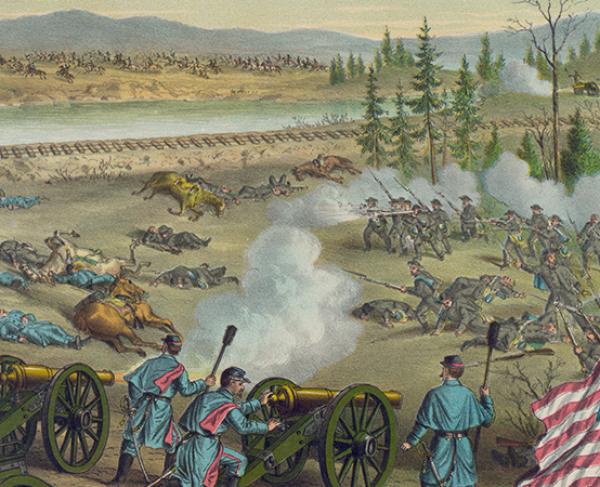