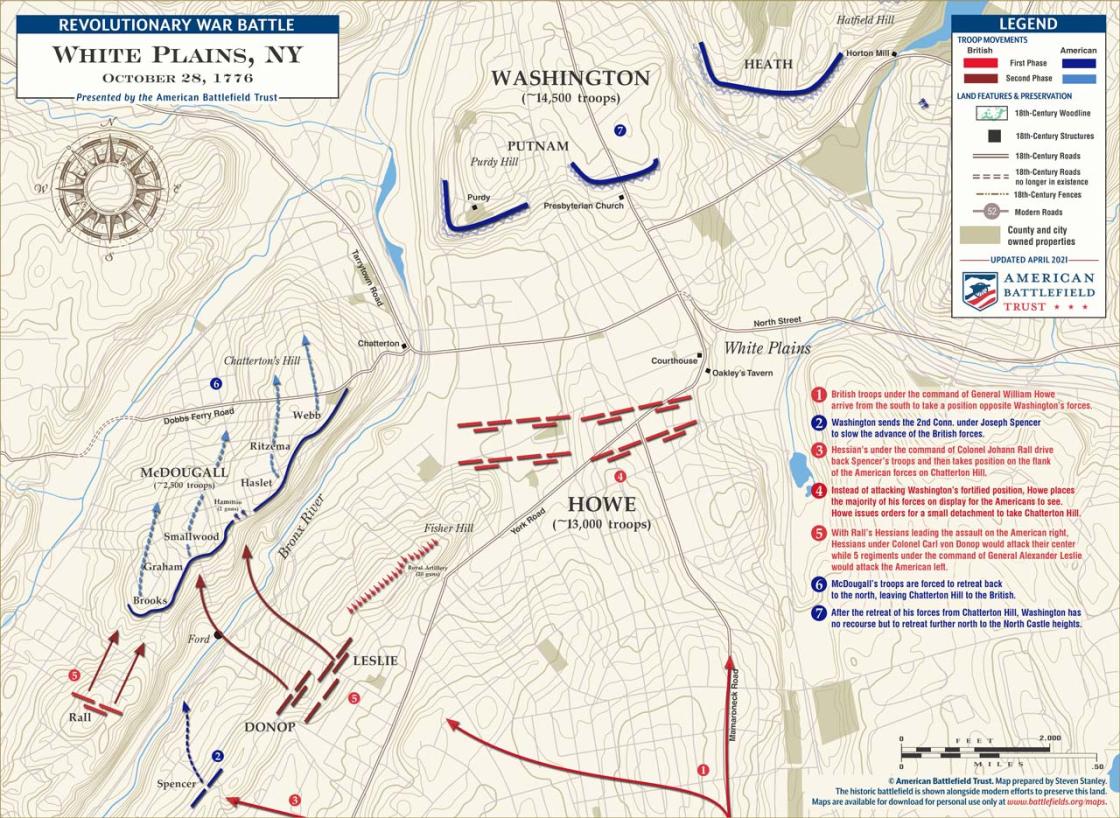 The battles around New York City were a disastrous chapter in the career of George Washington. The commander-in-chief fielded the largest number of soldiers (~23,000) that he commanded at any one battle of campaign but taking on the combined might of the Royal Navy and British Army, meant taking on 130 ships and some 32,000 of the King’s soldiers and Hessian auxiliaries. Washington’s forces were saved by the inaction of William Howe at Brooklyn Heights, when he failed to land the killing blow on roughly 9,500 Continental soldiers cornered on Long Island. Colonel John Glover and his “Marbleheaders” ferried the Continentals to safety. On September 11, 1776, the failed Staten Island Peace conference ushered in fighting at Kip’s Bay, where the British forced a landing on Manhattan Island. Washington’s men made a stand at Harlem Heights, earning a small victory, but William Howe, utilizing the Royal Navy and his tactical sense for maneuver, forced Washington to abandon the island and retreat north.

A slow British pursuit allowed the Continental Army to take up a position at White Plains, New York, along the banks of the Bronx River. The Americans fortified their southward facing position with the left resting on Hatfield Hill and Horton’s Mill Pond, and their center rested on Purdy Hill, and across the 14 foot wide Bronx River sat Washington’s right atop Chatterton’s Hill. The initial defense of the hill fell to militiamen, who did a poor job of fortifying the wooded ridgeline, rather they utilized stonewalls of the local farms for their defensive works.

The British Army approached the town and pushed back the Patriot skirmish line. General William Howe then marched his 13,000 man army into a wheatfield and deployed it for battle in an impressive display of martial gallantry. Howe seemed to be bluffing Washington into retreat, which he refused to do. Thus, Howe prepared his army for an attack, but rather than marching into the teeth of the American fortifications on Hatfield and Purdy Hills, the British commander spied the weak point in the Rebel line—Chatterton’s Hill.

Sending a detachment of infantry and some 20 cannon to bombard and then capture Chatterton’s Hill, Howe hoped to uncover the isolated American right flank. The British and Hessians soldiers were met by determined musketry of a Connecticut regiment sent to slow their advance while Washington shifted Continentals to the hill commanded by Gen. Alexander McDougall, Col. John Haslet, and other capable officers. The bombardment by the British unnerved the militia, but the timely American reinforcements slowed the British and Hessians. However, a Hessian force commanded by Col. Johann Rahl was able to dislodge the militia that protected the American right flank.  The line began to unravel as more Imperial soldiers rushed in to exploit the breakthrough. Soon, Washington's army was conducting a fighting withdrawal. Once again Howe was slow to pursue the Rebels, and Washington and his men slipped farther north as he employed a Fabian strategy to keep his army intact.

Rather than pursue the American’s deeper into New York, Howe turned back toward New York City where he planned to take advantage of another of Washington’s mistakes.