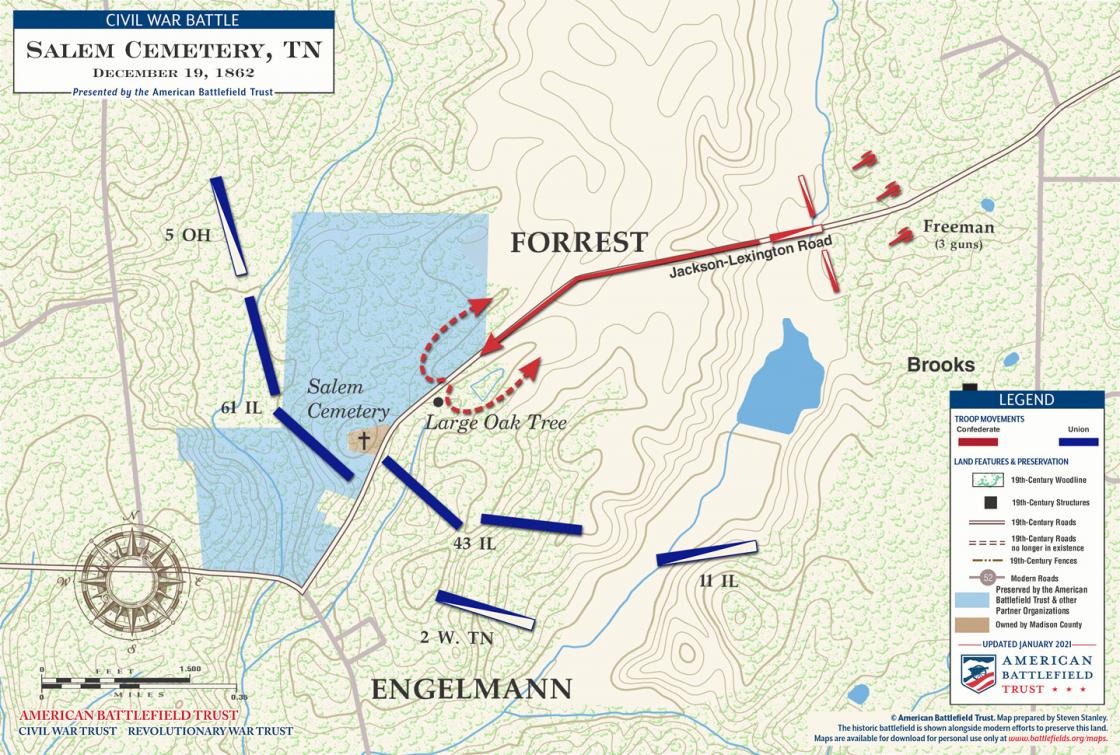 Following the Union victory at Shiloh, Federal troops quickly managed to besiege the town of Corinth (in nearby Mississippi) and then the state capital at Nashville. Despite the symbolic conquest of Tennessee, it was the former that actually posed a greater threat to the Confederacy as an important railway junction, allowing Union troops to strike out against the final stronghold on the Mississippi River, Vicksburg. Desperate to keep the Confederacy from splitting in two, Southern troops made one final effort to retake Corinth in the October of 1862, but the army of General William Rosecrans rebuffed the attackers.

Without any hope of retaking Corinth, Confederate cavalry General Nathan Bedford Forrest organized a daring raid into Western Tennessee in December to sabotage the rail tracks into Corinth, disrupting General Ulysses S. Grant’ssupply lines and giving Vicksburg time to prepare for the coming offensive. Smashing a unit of Union cavalry near the town of Lexington, Forrest proceeded to the town of Jackson, where his men encountered the Union garrison under the command of Bavarian-born colonel Adolph Engelmann on the 19th.

Under orders from his superiors to merely check Forrest’s advance, Engelmann ordered his two regiments to take a defensive position at the Old Salem Cemetery. The four hundred Confederates advanced in column formation and charged, but thanks to their training and discipline, the Union infantry held its ground and repulsed the attack, suffering six casualties and inflicting an unknown number on the Confederates. Forrest, however, was nowhere near the battle, and had instead used the engagement as a feint while he and the rest of his men destroyed a section of railroad to the North. Having accomplished his strategic aims, Forrest and his men withdrew and continued to raid other towns in Tennessee.

Forrest’s assault on Jackson may seem to be a very minor affair in the grand scope of the Western Theater, but it provides a nice example of the tactical acumen of a commander with comparatively little military experience prior to the Civil War. While the expedition did slow down Grant’s advance somewhat, it was not nearly enough to prevent him from taking Vicksburg six months later.

Learn More: The Battle of Jackson