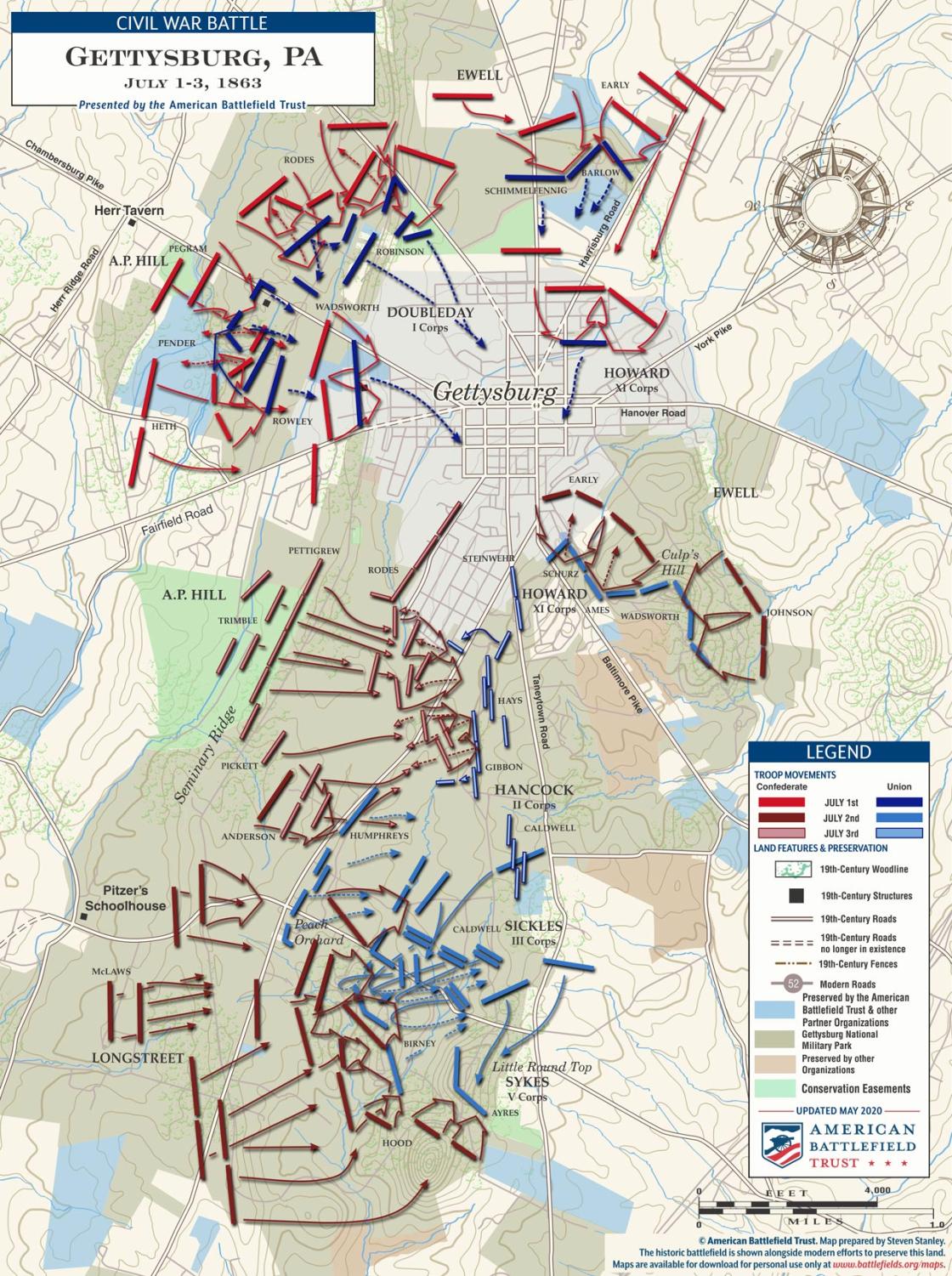 On the morning of July 1, an engagement between Union cavalry commanded by John Buford and Confederate infantry and artillery commanded by Lt. Gen. A. P. Hill set into motion one of the most famous battles in military history. By 10 a.m., Hill’s men had Buford’s troopers on their heels. Timely Union infantry reinforcements poured onto the field, overseen by “Left Wing” Cdr. John Reynolds. Shortly after entering the battle, Reynolds was killed, and after an hour and a half of stout resistance, the Federals held their own as a lull came across the field.

Tens of thousands of Confederate soldiers approached the field from the west and the north, as tens of thousands of Federals approached from the south. Late in the afternoon, outnumbered and in a poor tactical position, the Federals were driven from the north and west sides of the town. The Yankees rallied on Cemetery Hill and bolstered their line, incorporating the dominating Culp’s Hill on their right flank into their defensive position. Meanwhile, on their left, the Federals extended their line south along Cemetery Ridge, to the base of Little Round Top.

Late on the afternoon of July 2, the Rebel army renewed its assaults, striking the Federals at Devil’s Den, Little Round Top, the Peach Orchard and the Wheatfield. The next three hours witnessed some of the most intense fighting of the war. The Rebels were able to secure Devil’s Den, the Peach Orchard and the Wheatfield, and they dislodged much of the Federal line. Yet, the Federals still held tenaciously to Little Round Top and Cemetery Ridge. An ill-coordinated Confederate assault struck the right of the Union line at Culp’s Hill and East Cemetery Hill. At the end of the day, the Federal army was determined to stay and fight it out.

The battle renewed at 4:30 a.m. on July 3 at Culp’s Hill. For seven hours—the longest sustained fighting of the battle—the two sides grappled. In the end, the Federal position proved too strong to dislodge. After striking each Union flank, Lee set his sights on the Federal center. Amassing some 120 cannon, Lee bombarded that Union position. Union cannon roared to life, responding in kind. At the conclusion of the bombardment, 12,000 Confederate soldiers launched the most infamous assault of Lee’s career. In less than an hour, the Confederates were repulsed, and the next day, Lee started the long march back to Virginia. The last great Confederate offensive in the Eastern Theater was over.