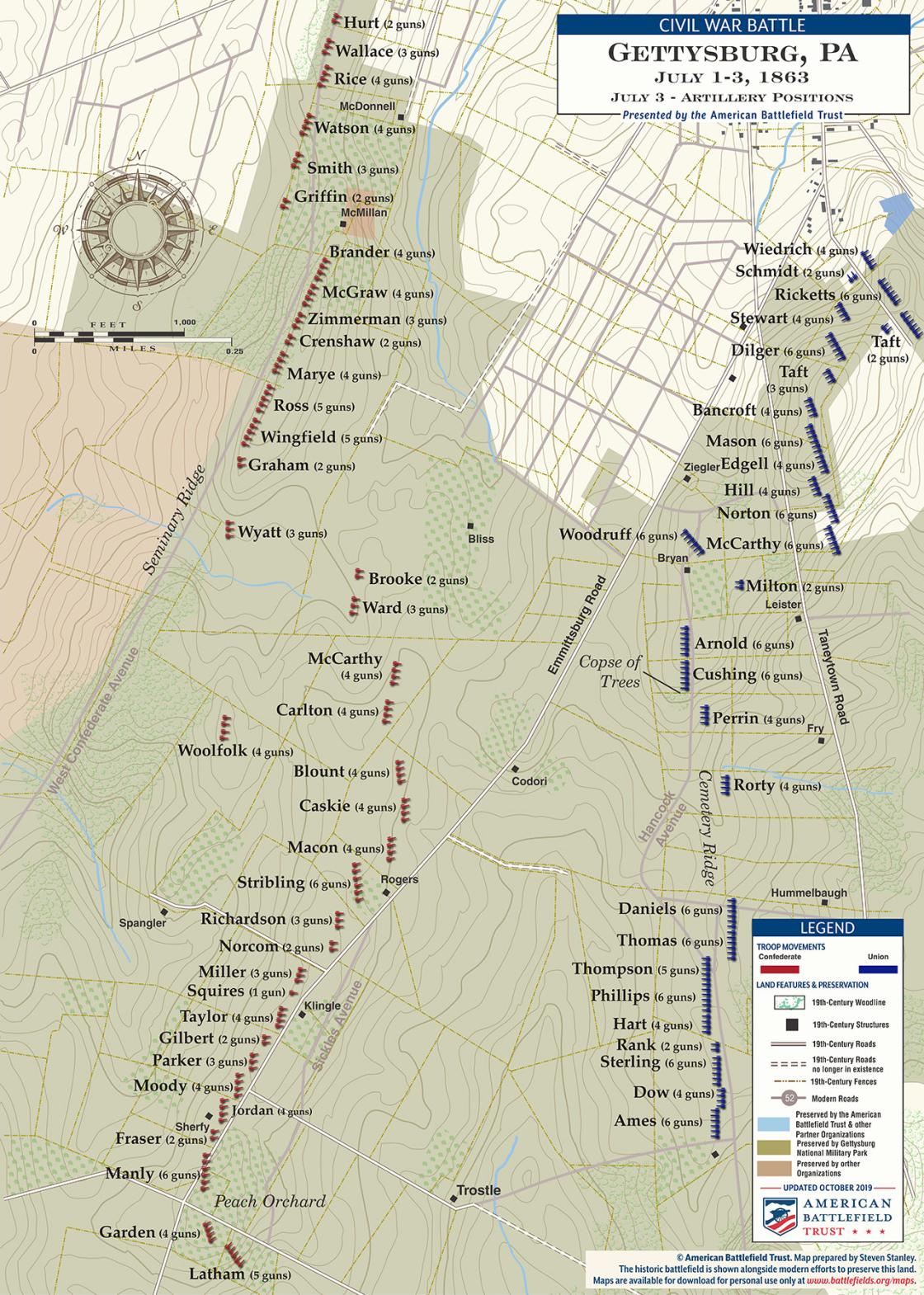 General Robert E. Lee believed that after the heavy fighting all along the Union line on July 2, the defenders along Cemetery Ridge would collapse after one more, well-directed assault. Early on July 3, he directed his second in command, General James Longstreet to organize a massive infantry attack on the center of the Union position, preceded by an artillery barrage to soften up the Federal infantry at that point in their line.

In preparation for the infantry assault, Longstreet placed Colonel Edward Porter Alexander, one of his artillery battalion commanders, in charge of placing around 150 artillery pieces in a 2-mile long line along Seminary Ridge. Some batteries occupied the high plateau of the Peach Orchard gained the afternoon before, others occupied the farms along the Emmitsburg Road. Batteries on Benner’s Hill and Oak Hill also contributed firepower.

Alexander’s orders were to silence as many Union batteries as possible on the north end of Cemetery Ridge before the infantry advanced. Around 1:00 p.m., Alexander ordered two signal guns to fire and the barrage began. Soon heavy smoke obscured targets on both sides, and many Confederate shells with defective fuses flew over their intended victims. Longstreet relied on Alexander’s judgement in determining when his artillery had achieved its greatest effect. When Alexander noted some Union artillery being withdrawn from the front line, he urged Longstreet to order the infantry forward.

Union commander George G. Meade anticipated Lee’s attack on the Union center. As many as 120 Federal guns along Cemetery Ridge and Cemetery Hill, placed by Meade's chief of artillery Henry J. Hunt, dueled with Confederate gunners at long range. Union infantry sought cover wherever possible. About two hours into the barrage, noting that much of the damage done was ineffectual, Hunt ordered his batteries to slow their fire to conserve ammunition. Winfield Scott Hancock, commanding most of the infantry on Cemetery Ridge, counter-ordered the gunners to return Confederate fire. Hunt withdrew damaged and depleted batteries as the bombardment wore on, and prepared to replace long range shot, case and shell with deadly canister when the Confederate infantry approached. Most observers noted the barrage slowly ended by around 3:00 p.m. and the infantry stepped out shortly thereafter.