We must remember the woman who sought to “burst every chain of wrong” | American Battlefield Trust Skip to main content
SHARE:
Civil War  |  Article

Great women of years past have too often been forgotten by the history books. And if I’m to shine a light on one of the many female stories, one woman, in particular, stands out. She devoted her life to equal rights, wanting to “burst every chain of wrong,” Her name? Frances Gage.

From a young age, Gage was instilled with abolitionist sentiment, as she aided her mother and grandmother in providing food, shelter, and other comforts to escaped slaves from Ohio’s bordering states. While the women in her life raised her to despise racial inequality, her father inadvertently raised her to hate gender inequality. When she was ten, he said, “What a pity you were not a boy so that you could be good for something.” This was the fuel that lit her “hatred to the limitations of sex” and the moment that drove her to become a fierce advocate for women’s suffrage.

A gifted writer and orator, Gage penned children’s books, hymns, essays, and newspaper columns to convey her ideas. And as a proud Ohioan, she deemed her state “the power of human progress.” In 1851, she presided over the Ohio Women’s Rights Convention, where Sojourner Truth delivered her famous “Ain’t I a Woman?” speech. Gage’s recollection of it — posted 12 years later — became the adopted version, despite its deviation from the original, where Truth did not say “Ain’t I a woman?” Gage’s influential work in her beloved Ohio impressed notable progressives, such as Susan B. Anthony, William Lloyd Garrison, and Lucretia Mott. In a Cincinnati speech, Gage declared “[a]nd Woman's voice would now be heard / In that, great song of harmony, / Not feebly, but in great accord, / In the great anthem of the Free.” Her call to action demands that listeners fight with words and will — rather than guns and cannons.

Despite her opposition to violence, Gage jumped into action during the Civil War. She began a lecture circuit, emphasizing the evils of slavery and her support for the 1863 Emancipation Proclamation. She worked with the Western Sanitary Commission, nursing soldiers at places such as Vicksburg — where the American Battlefield Trust has successfully saved 14 acres of hallowed battleground land. Like all who served, Gage and her words were greatly impacted by her time on and near the battlefields. Her poems and the battlefields where she nursed soldiers have felt the impact of preservation — a testament to the “grand anthem of the Free.”

After the war, Gage continued to fight tirelessly for temperance and women’s right to vote, as she believed the two were intertwined. “I ask the ballot, not because of its individual advantage to myself, but because I know and feel that individual rights, guaranteed to every citizen, must harmonize the world.”

Gage never saw women gain the right to vote. After years of devoted service to equal rights, she died in 1884, decades before the passage of the 19th amendment. And despite the numerous obstacles she faced in life, she remained optimistic. Gage believed in a world where woman was “man’s equal.” Her 1852 poem reflects on her hopes for a brighter future: “The world will be thinking, a hundred years hence.”

Gage wrote those words almost 170 years ago. What have we done with them? Young women in America: It is crucial that we remember those who came before us. Their work has been omitted from our textbooks, and their speeches and essays forgotten. So, it is now up to us. History is a living thing, full of characters who will tell us their story if we simply ask. 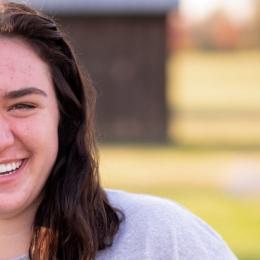 Francesca Lanese
Francesca Lanese, of Grove City, Ohio, is a member of the 2020-2021 American Battlefield Trust Youth Leadership Team. Francesca hopes to create an interactive website, with an informative video about the updated history of Camp Chase and its importance today. Camp Chase, established in 1861, was a...
Related Articles

"No Ingress or Egress": Refugees of the Siege of Vicksburg