After the stunning victory at Trenton on December 26, 1776, Washington expected a British counterattack in force. He immediately crossed his men and prisoners back across the Delaware River into Pennsylvania. The British began assembling their troops from below Trenton towards New Brunswick, Princeton, and Maidenhead (Lawrenceville). Washington wanted to keep building momentum but was still faced with the pending crisis of enlistments, many of which expired on January 1, 1777. On December 30, Washington crossed the Delaware River yet again, the third time that week, in an attempt to draw the British into an engagement on ground of his choosing. The move also placed his army in enemy territory, a calculated risk to try to resolve the enlistment crisis.

After crossing, Washington made an appeal to his men: extend their enlistments one month for a bounty of ten dollars. Addressing one regiment, Washington asked those who wanted to volunteer to poise their firelocks, but no one moved. Frustrated, Washington wheeled his horse and exclaimed,

“My brave fellows, you have done all I asked you to do, and more than could be reasonably expected; but your country is at stake, your wives, your houses and all that you hold dear. You have worn yourselves out with fatigues and hardships, but we know not how to spare you. If you will consent to stay only one month longer, you will render that service to the cause of liberty and to your country which you probably never can do under any other circumstances.”

At first no one moved, then one man stepped forward, then another, until almost every man had volunteered. Many offered to stay not one month, but six weeks instead. Washington would have the men he needed to continue the campaign.

On January 1, 1777, the New Year brought more good news. Money from Congress arrived, and the army was paid. In addition, Washington received a series of resolves from Congress, greatly expanding his powers to near limitless levels. Word also arrived that General Charles Lord Cornwallis was marching South with 8,000 men to attack the Americans at Trenton. Washington decided to lure the British into a trap, and make his stand on the south bank of a small creek, the Assunpink Creek, at Trenton.

Cornwallis, a trusted subordinate of General William Howe, had field command of the British forces in New Jersey, as Howe relaxed for the winter in New York. Cornwallis had been granted leave to return to England, but after the surprise attack on Trenton, Howe canceled his leave. Upon arriving in Princeton on January 1, Cornwallis consolidated his command and issued his orders. On January 2, he departed with 5,500 men and twenty-eight cannon towards Trenton, eleven miles away, leaving a reserve brigade at Princeton under Lieutenant Colonel Charles Mawhood, and 1,500 reinforcements at Maidenhead (Lawrenceville) under Colonel Alexander Leslie.

Washington, knowing the British must use the main highway as their route of advance, placed a delaying force halfway between Trenton and Princeton under the command of Brigadier General Matthias Alexis Roche de Fermoy. De Fermoy, however, returned to Trenton drunk and his command fell to the veteran rifleman Colonel Edward Hand.

Cornwallis, recognizing the advantage of light troops, deployed British light infantry and Hessian Jägers as skirmishers in front of his column. As these light troops came into range, Hand’s riflemen opened fire, beginning a running battle along the Trenton-Princeton Road. Every time the British would deploy in force, Hand’s men would retreat, using the woods, ravines, fences, and any bend in the road as cover. Hand used the small creeks and streams in the area as strongpoints to slow the British down even more. At Eight Mile Run, then Five Mile Run, and finally at Shabakunk Creek, the British advance was slowed to a crawl.

At Shabakunk Creek, Hand placed his men in a strong defensive position, including riflemen in the trees. Despite being outnumbered almost six-to-one, Hand’s men put up such a stalwart defense and volume of fire, the British thought they had encountered the whole Continental Army, deployed into battle lines, and brought their artillery up. It took Cornwallis two hours to dislodge the Continentals.

By 3 p.m., with only two hours of daylight remaining, Cornwallis had pushed the Continentals back to Stockton Hollow, a small ravine about a half mile from the outskirts of Trenton. Washington, hoping to hold the British off until nightfall, rode out to the position and ordered “as obstinate a stand as could be made.”

A pitched fight erupted, with Hand’s men firing from the houses in the area and the British pressing forward. Artillery thundered from both sides. Hand’s men slowly gave way, falling back through Trenton towards the Assunpink Creek Bridge and buying Washington the time he needed to strengthen the South bank of the Assunpink.

Hand’s men were in danger now, as the full weight of the British came to bear. Washington, seeing the rearguard’s peril, ordered Colonel Daniel Hitchcock’s Brigade forwards into the town. As British and Hessian troops caught up with the Continentals in town the fight became disorganized, and many Continentals began to flee towards the bridge, or towards the fords closer to the river.

Washington, to bolster his troop’s morale, stood his horse beside the southern approach to the bridge. As his men fell back across the bridge, and with muskets and cannon thundering to cover the retreat, Washington did not flinch, sitting calmly until his men were safely across.

The Assunpink Creek, and its bridge, were the key to Washington’s strategy. A mill next to the bridge resulted in a large millpond forming above the bridge, making the small creek impassible. Coupled with recent rains and snowmelt, the only way across the Creek was either the bridge, or a small ford close to the river. The stone bridge itself was narrow, and a small ridgeline gave the southern bank a commanding field of fire.

As the light faded on January 2, Cornwallis had a critical decision to make, either attempt to storm the bridge or wait until the next day to attack the Americans. The American position was formidable; Washington had massed his forty artillery pieces on the ridge, again outnumbering the British artillery and using their firepower to bolster his inexperienced troops. In the Continental center, guarding the bridge, were the veteran Virginians under Colonel Charles Scott, who, when Washington personally asked him to defend the bridge “to the last extremity,” replied “to the last man, excellency.”

Cornwallis decided to attack, knowing that the Americans could not recross the Delaware, and that a strong blow may shatter their formation, as it had done so many times before. If he could break the Continentals, the war, and the rebellion, would be over. At first, Cornwallis probed the Continental position for a weakness, but found nothing. Next, the inevitable order came to storm the bridge. Hessian Grenadiers made the first attempt. These shock troops were perfectly suited for such an attack. Supported by four cannon and Jägers, the Grenadiers stormed the bridge.

The Hessians only made it halfway across, every American musket, rifle, and cannon from the opposing bank delivered a withering storm of lead. In a matter of minutes, thirty-one Hessians lay dead or wounded, another twenty-nine opted to surrender rather than withdraw under the hail of lead.

Next, it was the British turn as another column of infantry formed up in the growing dusk. Almost twenty American cannon were aimed at the bridge, which was now littered with dead Hessians. As the British column approached the Continentals opened fire once again, and the British column slowed, but did not stop. The Americans watched in amazement as the British kept pressing forwards, slowing steadily until they reached the center, where the fire became too great and the column halted, then broke and ran.

Again, the Americans watched in amazement as the British reformed on the northern bank, and then rushed the bridge again. Again, the column was met by a storm of bullets and cannonballs from the American side. This time, the British did not even reach the halfway point before they broke and fled, followed by a cheer from the Continentals.

British reinforcements were called up, and the Americans were shocked to see a third attempt was being prepared. Washington ordered his reserves in, and the artillery loaded with canister. The British once again waded into the hailstorm, and once again, they broke before making it across. Finally, the guns fell silent. The bridge was red with blood and scarlet clad bodies, lying so close together that the roadbed was difficult to see. No exact casualty figures exist for the battle, a common theme for British defeats, but estimates put British losses at about 365 killed, wounded and captured and with the Americans losing about 100.

Washington had again stunned the British, winning another unlikely victory. There was a problem, however: the river. Even though the Continentals had held their ground on January 2, they were still trapped between the Delaware and the British army. Washington feared that Cornwallis would simply pin his smaller force in place, while moving around the American flank to crush the army into the river. To avoid this, Washington would again have to roll the dice and risk his army against all odds. 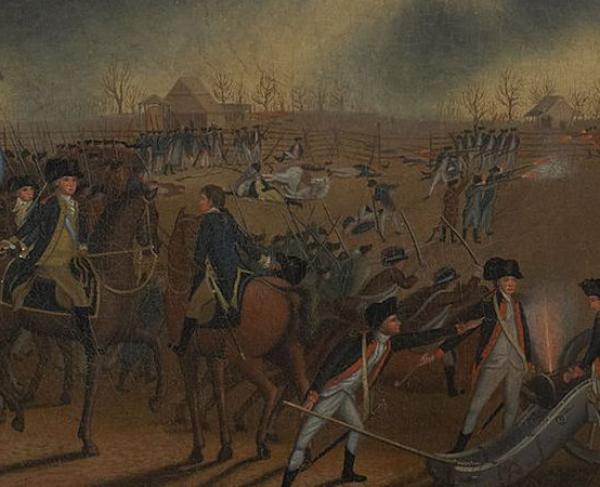 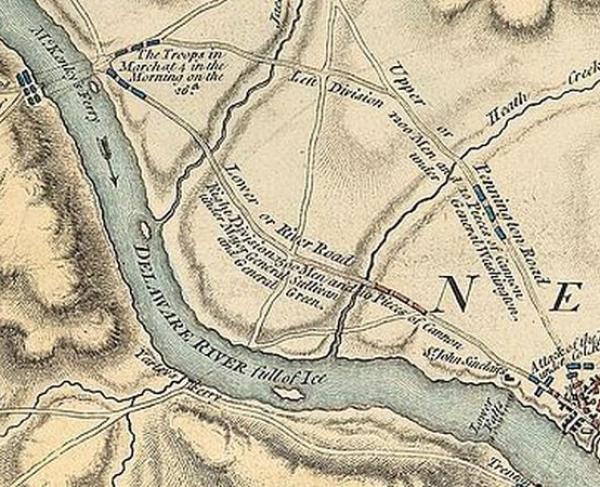 The Ten Crucial Days: The Path to Trenton