On November 27, 1778 British forces under the command of Archibald Campbell set out from New York City to capture the city of Savannah, Georgia. The Savannah expedition inaugurated the British “Southern Strategy” of focusing on the Southern states where it was believed the rebellion had less support. On December 23, Campbell’s invasion force arrived at the mouth of the Savannah River and on December 29, 1778, the city fell to British forces.

Accompanying Campbell was Col. John Boyd, a loyalist from the southern colonies.

After capturing Savannah, Campbell was reinforced by a British force under General Augustine Prevost that had marched north from Florida. Prevost assumed overall command, and, intent on following up the victory at Savannah, ordered Campbell to capture Augusta, Georgia. As Campbell moved inland, he dispatched Boyd and Major John Hamilton to recruit loyalists in the Carolinas for the British Army.

In early February, after successfully raising a regiment of 800 Tories, Boyd set out to reunite with Hamilton before rejoining Campbell who had successfully captured Augusta on January 31. During the march south, however, Boyd’s men suffered about 100 casualties, inflicted upon them by pursuing Patriot partisans.

After crossing the Savannah River, Boyd ordered his men to make camp along the road from Carr's Fort to Wrightsboro on the north side of Kettle Creek in Wilkes County, Georgia. Unknown to Boyd, about 350 Patriots under the overall command of Col. Andrew Pickens were close by, preparing to strike.

At 10 a.m. the morning of February 14, 1779, Pickens attacked with three columns, personally leading the assault in the center. Col. John Dooly commanded on the right while Col. Elijah Clarke led Pickens’s left. Catching the Tories by surprise, the Americans engaged Boyd's pickets in a clearing above their camp.

Although Boyd enjoyed numerical superiority, the Patriots’ sudden attack left the Tories with little time to prepare. Hoping to buy time, Boyd ordered his men to take up a position on a hill at the rear of the camp while he advanced with 100 men toward a fence and fallen trees opposite the Patriot center.

Boyd’s detachment slowed the American advance until Boyd was mortally wounded. Without their leader, the Tory line began to give way. Fighting a delaying action, the engagement soon degenerated into a rout. Left on the battlefield, the dead were buried where they fell. Today, white crosses mark the locations of the fallen soldiers.

As Pickens attacked in the center, his flanking columns under Dooly and Clarke emerged from swampy ground on the left and right to join the assault on the Tory’s main line. Boyd’s regiment was now led by Maj. William Augustus Spurgeon Jr., who stepped in to fill the role despite only being third-in-command. Spurgeon’s nominal superior, Lt. Col. John Moore, was either unwilling or unable to exercise the responsibility of command.

Eventually, despite outnumbering the Patriots by roughly two-to-one and commanding the higher ground, the Tories broke, abandoning horses and supplies and fleeing across the creek.

As the enemy line began to collapse, Col. Clarke noticed a ridge on the creek’s south side that the Tories could potentially use as a rallying point on which to reform. Despite having his horse shot out from under him, Clarke took a portion of his company across the creek. As Clarke advanced up one side of the ridge, a portion of the Tory regiment under Spurgeon advanced up the other side, attempting to contest Clarke for control of the position.

Clarke was soon joined by Pickens and Dooly, who led their men across the creek to join the renewed engagement. After a half-hour’s fighting, Spurgeon’s men were finally driven back and Tory resistance collapsed. The battle came to an end on the south side of Kettle Creek in the area now known as Spurgeon's Hill. Fortunately, Spurgeon was able to buy time for many Loyalists to escape Pickens’s pursuing men.

From beginning to end, the Battle of Kettle Creek lasted about four hours. By the time the fighting stopped, the Tory regiment raised by Boyd was all but destroyed.

Exact figures do not exist, and the information that does exist is somewhat contradictory, but it seems that out of about 700 men engaged, the Loyalists suffered roughly 200 casualties. Of those, between 40 and 70 men were killed or mortally wounded. Another 150 men were captured, many of whom were also wounded. The number of men captured includes those taken by pursuing Patriots and those who turned themselves in over the next several days.

Most importantly, a considerable portion of those who survived and escaped Pickens’s attack deserted and returned to their homes. Indeed, fewer than 300 men of the 800 initially recruited by Boyd ever joined the main British force.

On the Patriot side, Pickens’s force lost about 32 men killed and wounded. However, 33 Patriot prisoners being held by Boyd were freed when their captors were scattered.

In short, the Battle of Kettle Creek was a decisive Patriot victory.

Hoping to dissuade other Loyalists from taking up arms, Patriot leaders in South Carolina decided to make an example of the prisoners. Rather than being treated as prisoners of war, the men captured by Pickens were taken to Ninety Six and put on trial for the crime of treason. About half were found guilty. Of these, 50 were granted clemency, because, in the words of a Patriot newspaper, “…most of them had been seduced and terrified into the fatal step, by Boyd…and for want of proper information on the nature of our contest with Great Britain.”

About twenty remaining prisoners were sentenced to death. Fearing retaliation against their own prisoners held by the enemy, however, the Patriots hesitated, especially after General Prevost invaded South Carolina in April.

Eventually, all but five of the men condemned to die were granted a reprieve. Two more prisoners were eventually executed by North Carolina authorities. Fears of retaliation would prove prescient, as these executions helped drive an increasingly violent cycle of atrocities in the South. 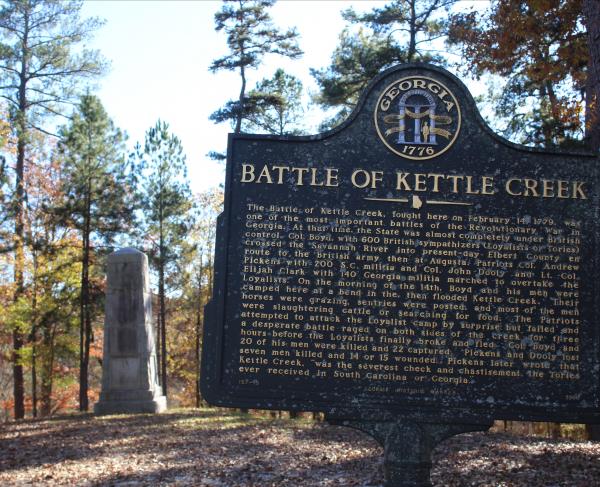