We don’t often talk about girl power when discussing the Civil War. This is because military accomplishments are typically dominated by men — in the past AND the present. So, as history continues to overshadow women’s contributions, it’s not surprising that most people aren’t aware of the numerous female soldiers who fought in the Battle of Gettysburg — and in the Civil War as a whole.

Highlighting the valiant female soldiers of Gettysburg combats the faulty idea that women were simply living on the sideline of battle, as many historical accounts so often position them as risk-averse and complacent to societal expectations. Disguised and determined to fend for their cause, these women showed their mettle on the battlefield and demonstrated that equality of the sexes was not far-fetched.

There are numerous Civil War-centered publications that briefly mention female soldiers at Gettysburg, such as DeAnne Blanton and Lauren M. Cook’s They Fought Like Demons: Women Soldiers in the American Civil War. Yet, the accomplishments and bravery of these soldiers aren’t common knowledge. While there are five thoroughly documented women who fought at the famed Pennsylvania battlefield, sources show there were several more — whose identities were shielded by clever disguises — that perished in battle, never to be heard from again.

Mary Siezgle was one of the most documented female soldiers at Gettysburg, but hardly anybody knows her name. After originally venturing to the front as a nurse, Mary endeavored to stay at her soldier-husband’s side and joined him as a disguised soldier in the 44th New York Infantry. After fighting alongside the 44th New York at Gettysburg in early July 1863, she was wounded but survived the struggle. The New York Times even reported on July 13, 1863, that Mary had been arrested for wearing a soldier’s uniform — as it was believed that the military garment could not possibly belong to her.

Unfortunately, the gender discrimination that Mary Siezgle and the other female soldiers faced back then still occurs today. By reflecting on the struggles these women endured, we can hope to build a better tomorrow and right the wrongs that have overstayed their welcome. And in striving for this progress, it is imperative that we uphold what Union women — like Mary — sacrificed so much to fight for: A unified nation with eyes toward equality.

Young girls today can look to these historic female figures as inspiration, for the Civil War’s female fighters exemplify that the seemingly impossible is indeed possible. Even though they were veiled by their adopted male-identities, these women made giant steps toward gender equality by proving they were capable soldiers.

In my work with the American Battlefield Trust’s Youth Leadership Team, I’m motivated by a multitude of mighty women who work to advocate for battlefield preservation at crucial sites like Gettysburg — where they’ve saved over 1,200 acres of land! But, on top of that, my involvement in the group enables me to speak to the powerful female stories engrained in the historic land the organization works ardently to preserve.

So, here’s to strong women — may we know them, recognize them, and thank them for their sacrifices. 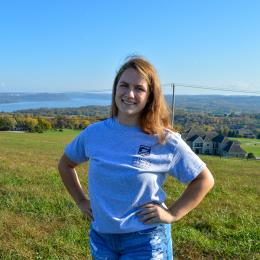 Ashlyn O’Neill
Ashlyn O'Neill, of Stewartstown, Pennsylvania, is a member of the 2020-2021 American Battlefield Trust Youth Leadership Team. Ashlyn is a student at York Catholic High School and is working to engage the youth who come to visit Gettysburg and find themselves not understanding the importance of the...
Related Articles