The Capture of Devil’s Den

Devil's Den, a boulder-strewn hill on the south end of Houck's Ridge, was once the backdrop for intense carnage brought about by artillery and infantry fighting on the second day of the battle.

On July 2, 1863, more than 5,000 soldiers from nine states fought a bloody battle at, arguably, Gettysburg’s strangest place. A place “barren of tree or shrub and almost destitute any green thing.” A place at which “nature in some wild freak had forgotten herself and piled great rocks in mad confusion together.” This place is known as Devil’s Den.

On that day, Union 3rd Corps commander, Maj. Gen. Daniel Sickles, was unsatisfied with the position assigned him and moved his corps forward as Southern forces were moving into position on Warfield Ridge, directly opposite their enemy. Confederate Maj. Gen. John Bell Hood’s troops had just endured an exhausting march to get to their position, on one of the hottest days of the summer.

After a 20-minute bombardment, thousands of Rebels advanced over the terrible terrain of the Gettysburg Sill, a mile-wide swath of igneous boulders that “increased fourfold the difficulty of the advance.” Their progress was further hampered by Yankee sharpshooters, artillery fire and regiments lacking concert of action; Hood’s line was jagged and partly broken, even before the true fighting began. More than 3,100 Southerners soon slammed into the 2,400 Northerners around Devil’s Den in the first substantial fighting on Gettysburg’s second day.

The Union line atop and below the Devil’s Den ridge (known then as Houck’s Ridge) braced for the onslaught. These were Brig. Gen. John Henry Hobart Ward’s men, who, at that time, comprised the extreme left flank of the Union forces. A small regiment of New Yorkers charged oncoming Texans, only to fall back despite initial success after Alabamians arrived on their flank. Alabamians and Texans swarmed amid the cannons atop the crest but found it too dangerous to stay there. Arkansans were held at bay in Rose Woods by multiple Union regiments. Southerners found fewer Federals on their own right flank — the even-worse terrain now known as the Slaughter Pen.

Brig. Gen. Henry Benning’s Georgians arrived and bolstered the Southern line. Soldiers from four Northern states arrived or were repositioned, but the Southern attack was too powerful. The Union abandoned Devil’s Den, and the Confederates captured the crest, as well as three of the cannons.

By this time, however, Union forces occupied Little Round Top — the new left flank. The Southerners had gained ground but hadn’t broken the main Union line, and the heights looked impregnable to them. “We whipped the Devil in his Den,” wrote one Alabamian, “but Round Top ran up too much toward the heavens.”

The Confederates occupied Devil’s Den for 22 more hours, skirmishing with the enemy and removing their wounded and the captured cannons. Combat in the Den had already made it a place of horrors, but after the armies left it was even worse. Many of the wounded were removed to hospitals, but very few of the dead were buried. They lay everywhere. Photographers and a sketch artist documented some of the human carnage twisted among the wild rock formations.

Although Devil’s Den later emerged in popular history as a sharpshooters’ bulwark and a nesting place of evil spirits, it was in fact one of Gettysburg’s most terrible infantry fights, with more than 1,800 men killed, wounded, captured or missing. One soldier, writhing in a hospital east of Gettysburg, could only rant about those “awful, awful rocks.” 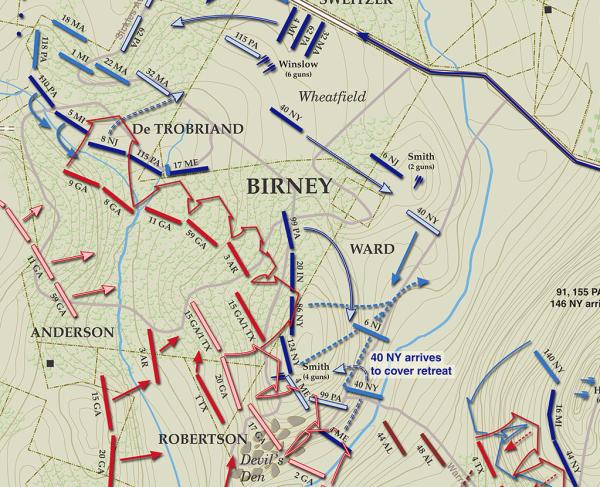