For generations, this half-acre property that played a major role in Pickett’s Charge has been occupied by commercial development, operating as a restaurant, theater, and gift shop known as “General Pickett’s Buffet.” Now, the business is looking to its next chapter – relocating to a new, larger site – and and giving the Trust the opportunity to buy and restore the property.

We have an unparalleled preservation opportunity to help save a piece of Gettysburg Battlefield that witnessed monumental points in history, including Pickett’s Charge and two World War camps! The long-time owner of the property has chosen to work with another local businessman to relocate the business several miles away and off the battlefield. We are fortunate that in this process, he approached the Trust about preservation options for the original restaurant site.

It’s a true win-win for everyone: more preserved battlefield and a beloved institution thriving in a new location, retaining local jobs and accommodating even more customers. But if we are unable to come up with the money — in this case, $1.5 million — he will be forced to sell to someone else.

In addition to the $1.5 million price tag, we estimate that it will cost another $155,000 to restore the landscape, preparing the property for an interpretation and visitor experience that will attract heritage tourists for years to come.

The good news is that this land is eligible for a whopping $750,000 in federal matching funds. Fortunately, we already have half that amount either pledged or in hand from anonymous donors and our great partner organization, the Gettysburg Foundation!

The bottom line is that we still need to raise $550,000 to ensure that we can close on the property and then have the funds on hand to begin the restoration and interpretation of the property once the federal matching grant is received.

Developers are desperate to scoop up this land. The landowner prefers to sell to us. Please give now and your donation will be TRIPLED!

While this tract of land at Pickett’s Buffet is small, it has witnessed an unbelievable amount of history.

On the First Day of the Battle of Gettysburg, Union cavalry and then Union infantry galloped or double-quicked to the sound of the guns right past this land, only to be driven back on the same roads later that day to the relative safety of Cemetery Hill where they made their stand.

From this tract on the next day, you would have been able to watch as Confederates swept across the farm fields and Emmittsburg Road to attack the Union III Corps of General Daniel Sickles in the Peach Orchard and the Wheatfield and could have seen battle smoke and heard the distant fighting for Little Round Top. There was also skirmishing on this very land, as the Confederates probed the Union defenses for any advantage.

On the fateful Third Day, from this tract of land you would have had a front-row seat to one of the largest and most significant charges of the entire Civil War.

By the end of those three days, 51,000 soldiers would either lie dead on the battlefield, be wounded (some lightly, many more grievously), become prisoners, or go missing, perhaps never to be seen again.

This land witnessed so much more history! In November of 1863, you would have seen crowds arriving on Cemetery Hill to see and hear President Lincoln deliver one of the most famous speeches in American history, the Gettysburg Address — speaking words that he had written only the night before.

Years later, in 1917, new-fangled weapons of war called “tanks” rumbled across the battlefield. What is now the restaurant’s parking lot was the location of the headquarters of the Camp of the United States Troops at Gettysburg (later dubbed Camp Colt), which was one of 34 WWI training camps in the United States. A young officer named Dwight David Eisenhower was put in command here in 1918, and he would come to love the battlefield and town of Gettysburg, eventually making it his home, which you can still visit today.

Years later, there was also a prisoner of war camp for German WWII POWs, on the same land as the training camp.

Help save a piece of land at Gettysburg that witnessed monumental points in history, including Pickett’s Charge and two World War camps!

From every point on the compass, this small parcel of ground has been a unique witness-place of American history. And today, you and I have the chance to reclaim it, restore it, and preserve its stories forever for our grandchildren and great-grandchildren.

Will you join in this urgent effort by making a gift today?

When I call this opportunity unparalleled, I do so with a sense of deep respect that every single hallowed acre you have helped us purchase, protect, and preserve is of vital importance to our nation. My friend, the stars have aligned as never before. For General Pickett’s Buffet, the time has come. The restaurant will be moved to another desirable location, off the battlefield, where it can employ more people and serve more customers.
David N. Duncan, President
Read David's letter

VIDEO | Hear our experts discuss and analyze Pickett's Charge from the site of the famed assault. Featuring longtime licensed Gettysburg guide and 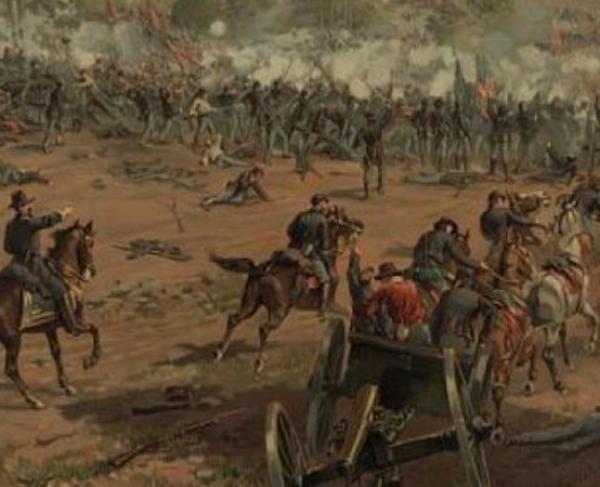