We can add six additional acres to those preserved at Antietam and preserve 122 acres of pristine land at Shepherdstown — all part of the 1862 Maryland Campaign — together having a total transaction value of $2.75 million for only $343,837.

An Additional Six Acres to the Existing Antietam Battlefield

The six-acre tract in Sharpsburg, Washington County, Maryland, is steps away from the West Woods and iconic Dunker Church, and a slightly longer stroll can take you to the Bloody Lane or Cornfield. A 70s style brick house, garage, and barn are currently on the property along with a stand of trees that did not exist in 1862. Over the past decades, we’ve been able to purchase and secure 464 acres at the Antietam battlefield site, and with the purchase of these six acres, we could unify and restore a significant portion of the battlefield including preserved, adjacent land to the South, West, North and East—it's a hole in the donut!

The much larger tract of 122 acres near Shepherdstown saw fighting days after Antietam and was instrumental in preventing the Confederates from resuming their advance northward. The land is presently in an almost original state but is now threatened by the development of a residential subdivision of McMansions. In Shepherdstown, we’ve saved more than 600 acres. The addition of this land to that already sizable plot means even more history will be preserved.

While we have had much success securing hallowed ground in Washington County and Shepherdstown, these plots are necessary to maintain uninterrupted parcels of hallowed ground at both sites.

Generous state and federal grants, as well as commitments from donors, have reduced the amount we need to raise to just $343,837 from the total of $2.75 million.

In September 1862, the Confederate president Jefferson Davis, along with General Robert E. Lee, devised a strategy to deliver a devastating blow on Northern soil.  At the same time, President Lincoln needed a Union victory to issue the preliminary Emancipation Proclamation from a position of strength. What played out included the bloodiest single day in American history.  ​​​​​

The Confederate Army’s strategy to move the war into northern territory had several goals: to recruit Maryland citizens and free it from Union control; to draw the Union army out of its capital where it could be dealt a decisive blow; to influence the 1862 midterm elections in their favor; to turn the attention away from Confederate failures elsewhere; and to convince prominent European countries to back the Confederate states. To prevent this action, Lincoln sent the Federals, under the command of General George B. McClellan, to protect key Northern cities and drive the Confederate army out of Maryland, in what became the Maryland Campaign which included the Battles of Antietam and Shepherdstown.

At Antietam, after hours of brutal fighting around the Cornfield, the Hagerstown Pike and near the Dunker Church, Confederate reinforcements arrived at the edge of what was known as the Reel Farm (on land currently owned by the Trust), just south of what would later be called “The West Woods.” These and other soldiers in the vicinity wrapped around an advancing Union flank under General John Sedgwick, inflicting 2,500 casualties and sending the Union troops reeling.

While the Union Army outnumbered the Confederates elsewhere on the field, the loss of life was nearly equal. The battle raged on with a casualty count of more than 22,000 men and a loss of life of more than 3,600, making it the bloodiest day on U.S. soil — greater than 9-11 or the deaths at D-Day.

In the end, the Confederates fell back across the Potomac River into Virginia.

Days later, with troops from both sides amassing at Shepherdstown, fighting continued with both sides gaining and losing ground. Although casualty counts were not nearly as high as Antietam, the Maryland Campaign came to an end while soldiers awaited the next bloody chapter in Virginia.

With the completion of the Maryland Campaign and the Battle of Antietam, Lincoln used the opportunity to issue his preliminary Emancipation Proclamation, now with a firm date to free slaves in territories under rebellion on January 1, 1863. This momentous decision changed the course of the war and ushered in a new birth of freedom for so many.

“At Antietam and Shepherdstown, the course of American history changed forever. We have waited decades to acquire these parcels of land, and I ask you to please help now to ensure they are not developed, destroyed, and lost forever.”
David N. Duncan, President
Read David's letter

Watch the action at the Battle of Antietam come to life with the Civil War Trust's all new "animated map," featuring a compelling video presentation 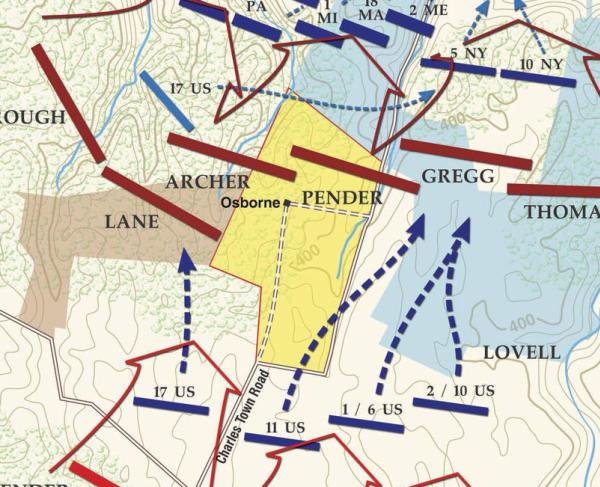