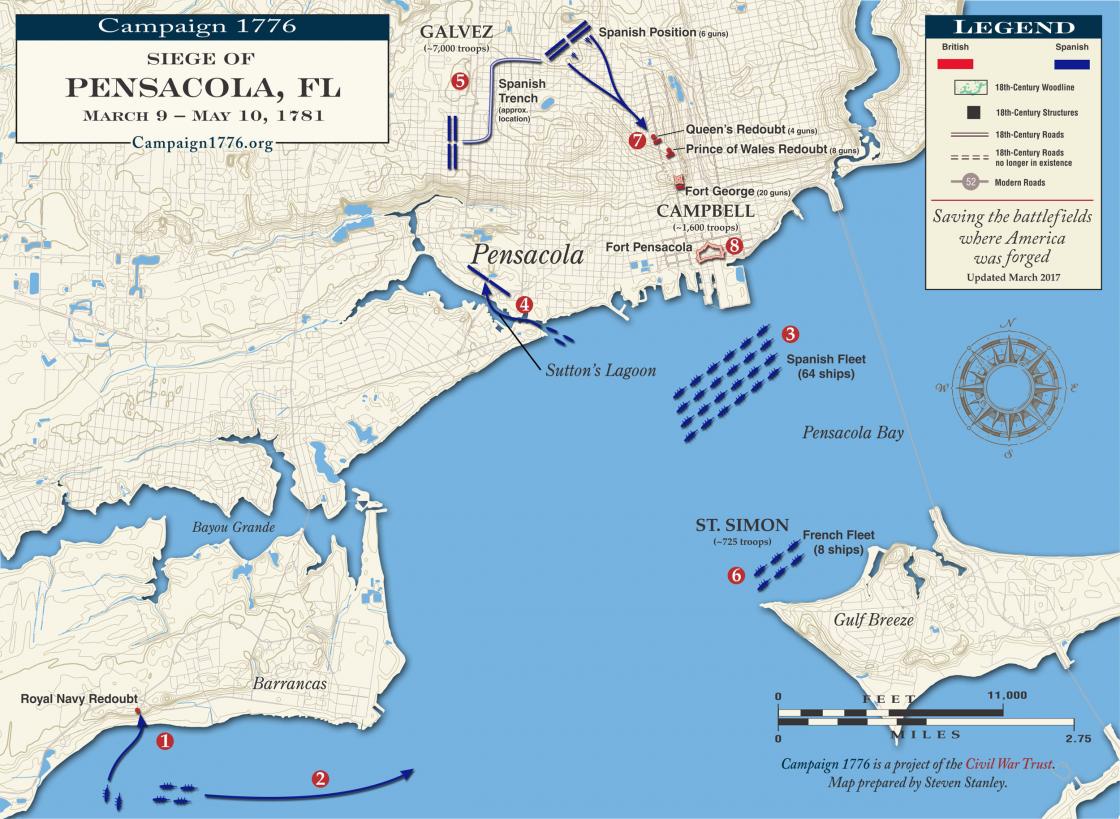 1-March 17, 1781: Spanish marines under the direction of the Spanish navy attempt a landing on the west end of the modern-day Naval Air Station, but are driven back by British officer leading Indians.

2-March 18, 1781: After observing the offloading of cannons and gunpowder from British ships, Galvez sails into Pensacola Bay under a hail of gunfire from the British redoubt, east of modern-day Ft. Barrancas. This action earns Galvez the title YO SOLO, because he alone was willing to pass through the entrance when the rest of the Spanish navy had protested.

3-March 19, 1781: Most of Spanish fleet reposition inside the bay.
March 22, 1781: Spanish reinforcements (926) arrive from Mobile sea and land near modern-day Allegheny Pier.

4-March 23, 1781: Spanish reinforcement arrive from NOLA (1400) via sea.
March 24 to April 12, 1781: Galvez begins to consolidate troops on the mainland. Gradually the army repositions to what will be its main camp northeast of Bayou Chico. It is harassed and attacked numerous times during this period.
April 12, 1781: The British attack in their largest attack yet, east of Bayou Chico. Galvez is seriously wounded.
April 13, 1781: Most of the Indians (400) depart; British garrison reduced to 1800.
April 20, 1781: Spanish (3000) and French (700) reinforcements arrive from Havana.
April 23-27, 1781: Spanish and British fight for the hill and fresh water spring north of modern-day Attacks Court. Once Spanish take, they now have a great place to begin siege works.

7-May 8, 1781: A fortuitous howitzer explosion ignites the gunpowder in Queen Anne's Redoubt. Almost half of the British garrison of 103 are killed, the rest are nearly all wounded. This redoubt is evacuated before the Spanish can take it. Soon the middle redoubt faces surrender. A truce is announced.
May 9, 1781: Terms are agreed.

Learn More: The Siege of Pensacola