An incredible opportunity for a $28-to-$1 match to save 158 acres in the Gettysburg Campaign!

Today, we have the chance to secure a $28-to-$1 match to ensure the preservation of two key parcels of hallowed battlefield ground that figure prominently in the Gettysburg Campaign of 1863 — one of which you may know and have seen and the other sits on a new-to-us battlefield.

Together, the parcels add up to nearly 158 acres, the equivalent of 119 football fields, if you can imagine that. And this is truly essential battlefield land, having a combined value of $9.8 million!

Thanks to expected federal and state government grants, a generous landowner donation, a grant from the HTR Foundation, and a great local partner organization, the Shenandoah Valley Battlefields Foundation, 96.4% of the total has been raised.

We need to raise the final $350,000 to help save this land and that any dollar you can commit today towards our goal is the equivalent of $28 — all the way up to a total value of $9.8 million!

If successful, we will add key missing pieces of two must-have battlefields to the hallowed ground we have worked together to faithfully protect — through a combination of determination, cultivation, and negotiation — for well over a decade along the roads leading to Gettysburg.

Ewell vs. Milroy: The Battle of Second Winchester

The first parcel, almost 154 acres, is a site at Winchester where three different battles raged, but let's focus on the Battle of Second Winchester, June 13-15, 1863.

After the Battle of Brandy Station on June 9, Confederate General Robert E. Lee ordered the Army of Northern Virginia’s Second Corps, under the command of General Richard Ewell, to attack several thousand Federals, led by General Robert Milroy, occupying Winchester, Virginia — a key transportation hub for several roads and a branch of the Baltimore & Ohio Railroad that ran along the east side of the property we and the Shenandoah Valley Battlefields Foundation (SVBF) have partnered to save.

Ewell, who succeeded General Thomas J. “Stonewall” Jackson as commander of the Second Corps, was under pressure to perform well against Milroy and cement his standing as Jackson’s replacement. Also, if Ewell could neutralize Milroy’s force, it would bolster Lee’s ambitious plan to take the war to the North for a second time.

Ewell’s three divisions totaling 22,000 men converged on Winchester’s garrison, held by about 7,000 Union troops. Milroy’s superiors urged him to abandon his position in the face of such overwhelming odds, but Milroy was confident he could hold off the enemy for at least five days, until reinforcements arrived. He was mistaken.

After part of the town’s fortifications fell, Milroy attempted to retreat, but Confederate General Edward “Allegheny” Johnson’s division marched before daylight along the Shenandoah Valley Turnpike — part of which also aligns with the property — to cut off Milroy’s retreat. Blocked, Milroy then attempted to break out by attacking Confederates positioned to the east.

The southern portion of Milroy’s force attacked across the target tract shown on this map, only to be repulsed by the Confederates. One Union soldier described the intensity of the battle: “A long line of fire streamed from thousands of rifles, interrupted now and then by the blaze of the battery.” Another Federal lamented, “It would have been folly for us to stand there to be butchered up without any mercy.”

Ewell won the day decisively. Milroy’s army suffered more than 4,400 casualties with about 2,500 of his men surrendering. The defeat destroyed Milroy’s army as a fighting force for the remainder of the war, and the Shenandoah Valley was cleared for Lee’s northward march (and we know where that led!).

A Once-in-a-Generation Opportunity at Gettysburg

The next tract is a four-acre, exceptional piece of historic land, which figured prominently on the second day of the Battle of Gettysburg. This property is known to generations of Gettysburg visitors as the site of the Battlefield Military Museum.

The tract is located on the slopes of East Cemetery Hill, abutting the Baltimore Pike and sitting just below the crest of the Union artillery position on Stevens Knoll. Today, the four acres contain the large, 1960’s-era Battlefield Military Museum. Last year, the family that has owned this property for many years sold an adjacent one-acre tract to the Trust that contained the historic McKnight House. Now, the Trust has a once-in-a-generation opportunity to purchase the four-acre remainder of the family’s property for preservation and eventual restoration to its 1863 appearance.

Tens of thousands of Union troops marched right in front of, paused on, passed over, or fought on McKnight’s property and the four-acre tract the Trust is now working hard to save.

The National Park Service has restored the historic wood line around Stevens Knoll, making this four-acre parcel we want to save even more visible and important.

Several years ago, a Comfort Suites hotel was built on the Baltimore Pike opposite this property. I fear that if we fail to act now, another name-brand hotel or other commercial structure could be built there. Or maybe a residential developer would scoop up the property and attempt to have it re-zoned for an apartment building or townhouses.

This would be a devastating blow to our years-long preservation efforts along the Baltimore Pike. Take a look at the 2009 and 2021 “then and now” maps to see our work along the Baltimore Pike. Together we’ve completed nine transactions, totaling more than $3.1 million, permanently protecting almost 40 acres! Each acre we preserve along the Pike prevents developers from gaining a foothold to mar this hallowed landscape.

Our vision is to buy this pivotal piece of battlefield ground and restore it to its near-original condition such that, if General George Meade’s troops were to somehow march up to the site again, they would know exactly where they were.

You can be part of our effort to safeguard two pivotal Gettysburg Campaign sites before they fall prey to development, destroying historic grounds where brave men fought and died.

Will you help secure 158 acres of hallowed land by taking advantage of the incredible $28-to-$1 match before us? And would you please consider adding something extra to your gift to better ensure we reach our $350,000 goal as soon as possible?

If successful, you and I will be adding key missing pieces of two must-have battlefields to the hallowed ground we have worked together to faithfully protect — through a combination of determination, cultivation, and negotiation — for well over a decade along the roads leading to Gettysburg.
David N. Duncan, American Battlefield Trust President
Read David's Letter 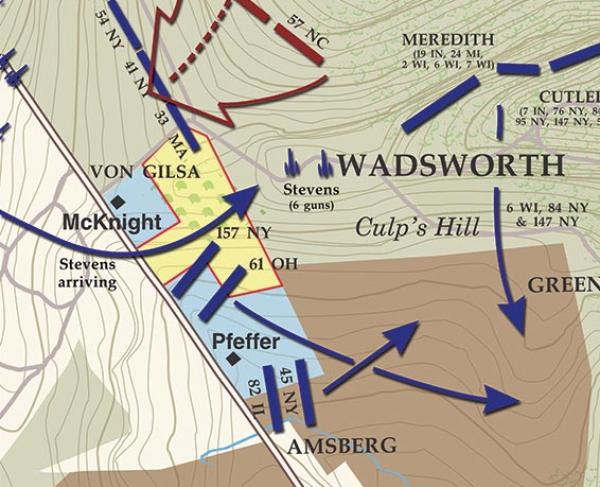