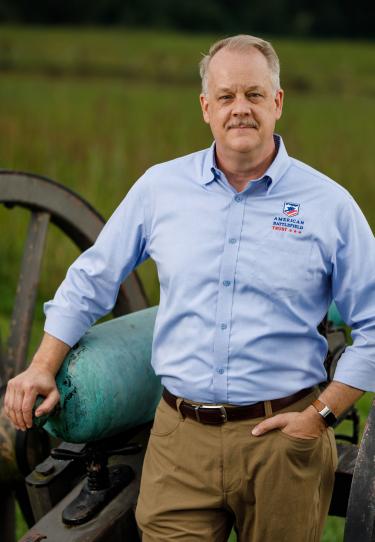 Do you know what Mansfield, Louisiana, the Wilderness, and First Deep Bottom, Virginia all have in common?

If you guessed that each of them witnessed a consequential 1864 battle, then you’re right on the money!

If you recognized that each of them played a role in General U.S. Grant’s grand strategy for the final, full year of the war, then you’d also be hitting the nail on the head…

But as I’m writing to you now, these three 1864 battlefields have something else in common, too . . .

Today, each of them represents an opportunity for you and me to save American history in perpetuity, to preserve the stories these battlefields tell for all time, and to create a legacy that will last for generations.

Thanks to a combination of anticipated federal grants and gifts from our great local partners at the Central Virginia Battlefields Trust and the Virginia Land Conservation Foundation, we have already secured more than 88% of the funds needed to pay for more than $1.2 million of transaction value, which means . . .

However, while all of that is certainly good news, the bad news . . . is that until we raise the final $144,671 needed to complete these transactions, all three of these tracts still face the ever-present threat of development and the destruction of the stories they hold.

If we don’t act swiftly, 95 acres of hallowed ground could be lost forever.

By now you’ve probably noticed battle maps for each of the three battlefields I mentioned above, as well as a fourth map for the battlefield at Glendale, VA.

No, I haven’t made a mistake!

That, my friend, is because 39 of those irreplaceable 95 acres are, in fact, twice-hallowed ground. The land you can save today at First Deep Bottom also saw action in the 1862 Battle of Glendale, doubling the importance of saving this hallowed ground as soon as possible.

Let’s take each of the battles in turn, beginning with the Battle of Mansfield, Louisiana. In the spring of 1864, Union forces launched an offensive known as the Red River Campaign. Its objective was to capture Louisiana’s Confederate capital at Shreveport and then open the gateway for Federal troops to enter Texas.

However, between Banks’ army and the Union target was a Confederate force — less than half the size of their opponents — led by General Richard Taylor, the son of Mexican War hero and American President, Zachary Taylor.

Banks’s men made their way to the top of a slope called Honeycutt Hill only to discover the entirety of Taylor’s force arrayed in a line of battle in front of them. Knowing they would need reinforcements to advance, Banks sent back for more troops.

Several hours of heavy skirmishing followed until late in the afternoon and impatient to go on the offensive, Taylor attacked.

The Federals sent volley after volley into the advancing Confederates, but the wave of Southerners continued to rush Honeycutt Hill. The Federal soldiers desperately awaited reinforcements, but a disorganized tangle of troops and wagons from their own 20-mile-long supply lines delayed the arrival of any relief.

“The rebels were literally swarming out of the woods. Then the battle began in real earnest: shell, canister, shrapnel, and lead were poured into the enemy’s ranks, breaking them again and again, but only for an instant; for they would rally and press on firing steadily, and defying us with that ‘rebel yell’ whose echo rang in our ears for so many days and disturbed our slumber for so many nights.”

Another soldier, Joseph P. Blessington, an infantryman in the 16th Texas Regiment described how the Federals greeted their “coming with a perfect shower of leaden hail. Shells, canister, and bullets are falling around like a hail-storm . . . still there is no faltering.”

Soon the Union troops atop Honeycutt Hill found themselves outflanked and nearly surrounded by Taylor’s troops. The Union line crumbled, opening the way for Taylor to push the Federals off the hill, the battlefield, and pretty much out of the entire campaign.

Casualties for both sides were staggering — in General Alfred Mouton’s Confederate brigade, nearly every regimental commander was killed. The losses for the U.S. Fourth Division were an alarming 43 percent. An Ohio Infantryman later said of the battle that the bullets rained down “like a hailstorm,” and Joseph Blessington commented that “the road was red with their blood,” when describing the Union retreat.

Another observer, War Correspondent John Russell Young of Philadelphia described the “crashing of trees, the breaking down of rails, the rush and scamper of men,” that characterized the Battle of Mansfield.

Now, keep that image of broken branches and rushing men in your mind for just another moment as we travel north to another famously forested battlefield: The Wilderness.

One of the initial stages of Grant’s Overland Campaign in the East, the Wilderness marked the first major battle between the newly appointed Union commander and his Confederate counterpart, General Robert E. Lee.

The 36 acres of core battlefield that we have the chance to save today at the Wilderness help tell another piece of that story, one that unfolded on the first day’s battle on May 5, 1864.

From this parcel, the Confederates launched part of the counterattack that stymied the Union advance along the Orange Turnpike. Looking to your battle map, you can see how each line formed perpendicular to the thoroughfare.

As you’ve no doubt guessed, this meant men on both sides moved “cross-country,” cutting through dense forest as they advanced. One soldier from the 3rd Alabama Regiment later recalled that “The woods in front were so thick that it was impossible to see more than 20 steps from our line.”

Imagine for just a moment that you’d been given orders to advance toward an enemy through woods so thick you can’t even see them!

Or imagine overhearing Grant’s famous comments about his new opponent: when a panicked officer voiced his concern about Lee’s next move, Grant replied,

You may recall seeing this tract in a previous letter, from more than a year ago; this one has been a serious fundraising challenge, but as I mentioned before, timely financial assistance from our great friends at the Central Virginia Battlefield Trust, and thanks to a generous grant from the Virginia Land Conservation Foundation, preservation of this tract is now finally within reach.

If we were unable to save this land, at a battle which saw 30,000 total casualties, I expect it would be sold for residential development, which still poses a constant threat to far too many battlefields across our country.

Which takes me to our third and final tract . . . a 39-acre parcel outside of Richmond, Virginia, that saw action in both the First Battle of Deep Bottom in July of 1864 and in the Battle of Glendale two years before.

To begin, during the 1862 Battle of Glendale, units led by James Longstreet and A.P. Hill passed over this land as Confederate forces attacked the retreating Union army during the Seven Days Battles. It also marks the vicinity (though the precise location isn’t known), where Robert E. Lee and Jefferson Davis came within range of Union artillery, forcing them to relocate for safety!

Thanks to the dedication of preservationists like you, we’re coming close to substantially completing the Glendale Battlefield, and saving these acres today will bring us even closer to that goal! I know it can be tempting to sit back and celebrate when you’ve come a long way on an important project, but we must see this battlefield’s preservation through to the end!

And, please, don’t forget! This land also played a role in the Petersburg Campaign in the summer of 1864:

As the main body of Grant’s troops pursued Lee further into Virginia, another portion of the Union Army was working to weaken the Confederate defenses around Petersburg, destroying fortifications and drawing Confederate troops into combat when and where they could.

One of these diversionary maneuvers occurred when General Winfield Scott Hancock’s Second Corps, along with two divisions of Philip Sheridan’s cavalry, crossed north of the James River at a bend known to locals as Deep Bottom. Their aim was to threaten Richmond and pressure Lee to dispatch a sizeable number of his Petersburg defenders to stop this advance.

Hancock met with initial success in his expedition and then pushed his advantage — he positioned Sheridan’s Cavalry near Gravel Hill, where a sharp firefight with the 10th and 50th Georgia Regiments ensued.

Reinforcements from the Petersburg sector came to the aid of both sides on the following day, July 28, 1864, playing into Grant’s objectives to draw forces from around Richmond. Sheridan ordered his cavalry forward toward Gravel Hill, where they ran headlong into three Confederate brigades.

Desperate, fighting at close quarters ensued until the Federal cavalry eventually pushed the Confederates back. The tract we’re working to save, located alongside the Gravel Hill Church, includes at large portion of the actions from July 28 and helped set the stage for the Battle of the Crater on July 30.

Preserving this land will also simultaneously protect the history of Gravel Hill, a unique and historically significant community in its own right.

In 1777, a Quaker named John Pleasants freed his slaves in his will. His son, with the assistance of none other than John Marshall (yes, America’s first Supreme Court Justice!) secured freedom for 78 individuals, along with 350 acres of land on which they could settle.

By saving these acres today, you and I can protect two battlefields, and also the stories of the formerly enslaved people who settled Gravel Hill and their descendants, many of whom still live in the area!

I wish I had more time to share with you even more about each of these battles, but, before I forget, I must also alert you to a special offer: With your gift of $64 or more today, I will send you your own special copy of Hell Itself: The Battle of the Wilderness, May 5-7, 1864. Written by historian Chris Mackowski, this book details the Battle of the Wilderness and its impact on the Overland Campaign.

But hurry! Just before sending this letter, I heard from our publisher that we have only 1,864 copies of the book, on rush order! This means that you must act quickly to secure your copy before they are all gone!

And we must also act now to save this hallowed ground today. Each of these battles is a piece in the puzzle of the larger strategies that characterized the final year of the war.

And as there is simply no substitute for walking on the very ground where important history happened, I ask you to make your most generous gift today to ensure that future generations will always be able to explore and learn from our unique American battlefields.

Any gift you are able to make today will preserve the stories of those three crucial 1864 battlefields, along with land from the 1862 Battle of Glendale and the historic community at Gravel Hill, making this a rare and important opportunity to preserve our nation’s stories.

Will you help us get over the finish line to save 95 acres of battlefield land, multiplying the power of your generosity by $8.90-to-$1? Thank you so much for your generosity and dedication to our great cause!

Sincerely and gratefully yours,

P.S. Don’t forget! We’ve secured more than 88% of the needed funds to save these 95 acres for all times! But I need you to help on this important 1864 preservation effort! Don’t miss this chance to see the power of your donation dollar multiplied by $8.90-to-$1 today! Please visit our website to learn even more about these historic acres and to give securely online at battlefields.org/1864-battlefields-trio. Thank you!

Thank you for so generously supporting the cause of battlefield preservation, not only on these three tracts but also at battlefields all across America. I hope you and your family are all well, and I urge you to please take care of yourself; I cannot spare you!